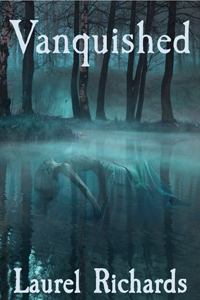 Today's featured book is Vanquished by Laurel Richards.
Genre Fantasy
Author Laurel Richards
Book heat level (based on movie ratings): PG
Three strangers brought together by war.
The Ulanesh—vicious soldiers from the underrealm—are invading the forest and destroying everything in their path. Standing against the enemy, Evrenor is a captain in the Quennin army and has been tasked by his king to find allies. He enlists the aid of the ancient sea sorceress Valkaria, whom he wakes from a curse that has entombed her at the bottom of a lake for a thousand years. She must regain her powers after a millennium of disuse or else watch everyone around her die.
Evrenor finds another ally in Damir, a woodsman whose people are so reclusive that outsiders consider them myths. The tree-talking woodsmen can blend perfectly with the forest, and they are deadly with their daggers. Damir is ready to take down the enemy, but he has to strike before the vision he's had of his own death comes to pass.
An awakened sorceress, a mysterious woodsman, and a cunning army captain—will their combined forces be enough to vanquish the enemy?
Amazon US http://www.amazon.com/Vanquished-Laurel-Richards/dp/1523492791/
Amazon UK http://www.amazon.co.uk/Vanquished-Laurel-Richards/dp/1523492791/
Amazon CA https://www.amazon.ca/Vanquished-Laurel-Richards/dp/1523492791
CreateSpace https://www.createspace.com/6010751
Barnes and Noble http://www.barnesandnoble.com/w/vanquished-laurel-richards/1123456320?ean=9781523492794
Kobo https://store.kobobooks.com/en-us/ebook/vanquished-11
iTunes https://itunes.apple.com/us/book/id1086646652
Books-A-Million http://www.booksamillion.com/p/Vanquished/Laurel-Richards/9781523492794?id=6639507672675
Inktera http://www.inktera.com/store/title/6a0b7697-4536-44c5-9c48-6ae564374780

Laurel is a fiction author with a passion for shifters, space travelers, and other memorable characters. She has gathered inspiration from lots of different sources throughout her life and is here to share her imagination through storytelling. Laurel writes sci-fi/fantasy, paranormal, and funny mysteries, with various degrees of romance mixed in. You can find Laurel at http://www.author-laurelrichards.com.
Website http://www.author-laurelrichards.com/
Twitter https://twitter.com/Laurel_R_books
Amazon Author Page https://www.amazon.com/author/laurelrichards
Google+ https://plus.google.com/118269442385691046045/posts
Goodreads http://www.goodreads.com/LaurelRichards
Goodreads Blog http://www.goodreads.com/author/show/6035139.Laurel_Richards/blog
Manic Readers http://www.manicreaders.com/laurelrichards/
Posted by Kayelle Allen at 8:14 AM