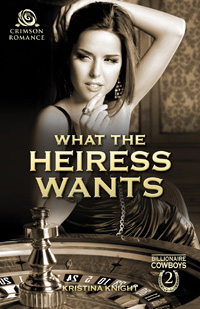 Today's featured book is What the Heiress Wants, Book 2 in the Billionaire Cowboys Series by Kristina Knight.

About What the Heiress Wants

Genre Contemporary
Book heat level (based on movie ratings): PG13
Denver publishing heiress Miranda Clayton is tired of society parties and shopping, but her tycoon father refuses to take her seriously. Her solution? Beat him at his own game – by going to work for his top competitor, Connor Reeves.
Connor isn't fooled by Miranda's act for a second. He knows exactly who she is; the question is what does the lady want? After their first meeting, Connor knows what he wants – Miranda in his bed! But the more he's around Miranda the more he wants something more than a short-term fling. The question is does the lady want Connor – or his business?
Publisher http://www.crimsonromance.com/contemporary-romance-novels/what-the-heiress-wants/

Once upon a time, Kristina Knight spent her days running from car crash to fire to meetings with local police--no, she wasn't a troublemaker, she was a journalist. Her career took her all over the United States, writing about everything from a serial killer's capture to the National Finals Rodeo. Along the way she found her very own Knight in Shining Cowboy Boots and an abiding love for romance novels. Kristina writes contemporary romance with a smattering of sass, sex and (of course) drama, and she loves hearing from readers. And just like the characters from her favorite books, she's living her own happily ever after.
Website http://www.kristinaknightauthor.com
Blog http://www.kristiknight.blogspot.com
Twitter http://www.twitter.com/authorkristina
Facebook http://www.facebook.com/kristinaknightromanceauthor
Amazon Author Page http://www.amazon.com/Kristina-Knight/e/B0081LO6DM/
Posted by Kayelle Allen at 7:05 AM