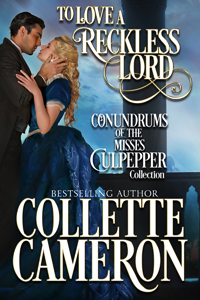 Entertaining, mesmerizing laugh-out-loud Regency Romance romps.
The first three full-length installments of the Conundrums of the Misses Culpepper Series featuring devilish rogues and the capricious women who capture their hearts.

To Love a Reckless Lord, Conundrums of the Misses Culpepper Collection

Brooke: Wagers Gone Awry
Brooke Culpepper resigned herself to spinsterhood when she turned down the only marriage proposal she’d likely ever receive to care for her family and farm. Heath, Earl of Ravensdale is none-too-pleased to discover five young women call the estate he won and intends to sell, their home. Desperate, pauper poor, and with nowhere to go, Brooke proposes a wager. His stakes? The farm. Hers? Her virtue.
Blythe: Schemes Gone Amiss
Intrepid and outspoken, Blythe Culpepper is dragged against her will to London for a Season. To her dismay, her guardian enlists the devilishly attractive Lord Leventhorpe, the one man she detests, to assist with her Come Out. Haunted by childhood trauma, Tristan, the austere Marquis of Leventhorpe, usually avoids social gatherings. So why, against his better judgment, does he agree to aid his closest friend in presenting the Culpeppers to the ton?
Brette: Intentions Gone Astray
A rogue turned rector, Alexander Hawksworth, prefers soirées to sermons and parties to prayers. After unexpectedly inheriting an earldom, he determined to make the precocious and petite, Brette Culpepper, his countess—Until he’s accused of murdering the previous earl. Brette adores London Society, but her world is titled on its axis when rumors circulate she’s a peer’s illegitimate granddaughter. Worse, a newly appointed guardian intends to force her into wedding an elderly lecher.
Genre Historical Romance
Book heat level (based on movie ratings): R
Publisher Blue Rose Romance
Amazon https://amzn.com/B06X1DNYNP/
Barnes and Noble https://www.barnesandnoble.com/s/2940154231555
iBooks https://itunes.apple.com/us/book/id1207659651
Gumroad https://gum.co/TLARL
Kobo https://www.kobo.com/us/en/ebook/to-love-a-reckless-lord