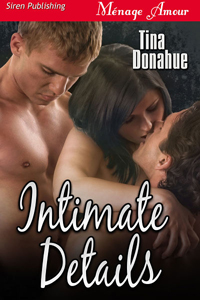 Title Intimate Details
Genre Contemporary Menage
Author Tina Donahue
Book heat level (based on movie ratings): R
As a computer hacker, she demands justice.
As a woman, she craves two powerful and commanding men.
Shana's been hacking one of Manhattan's most corrupt executives, making him pay for what he's done to his victims. Using her skills, she convinces Mike and Cody to hire her at their intelligence-gathering firm, where intimate details help their clients.
Never has Mike met a woman as delicious as Shana. Smart as hell, curvy and assured, she'd be a delightful challenge in bed. Cody's carnal hunger is equally intense. He and Mike want to know everything about her.
She won't divulge the secrets of her past. All she can offer is unquenchable desire and her heart.
During weeks of shameless lust and pleasure, Mike and Cody peel away the layers of Shana's life. The stunning truth changes everything. They'll do all that they can to keep her safe…and in their arms.
Publisher http://www.bookstrand.com/intimate-details
Amazon http://www.amazon.com/dp/B00QFVZJ04/