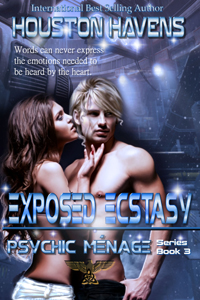 Welcome to Houston's world of romance where fantasy becomes reality.

Genre SciFi, Erotic Romance, Menage (MFMM/MFM), PNR, Fantasy, Futuristic, Suspense, Dystopian, Post-Apocalyptic, Mystery
Author Houston Havens
Book heat level (based on movie ratings) R
Daughter of the Dirt Dweller’s ruler; Tessla Reto attempts to escape the Underworld after the mysterious disappearance of her best friend. She knows her untimely death is also near if her father, Landen Reto discovers her part in forming the rebels to fight against him. The two men sent to help her get away are killed and she’s rescued by a handsome stranger…or is she?
Faerydae returns to Earth in search of an inner peace his soul can’t find after the death of his friend Chandra Lamar. Instead, he finds himself in an unplanned rescue of a woman that stirs everything he’s fought a lifetime to deny. Can Faerydae stay focused on his goal to expose his past and true Fae bloodline, or will destiny play her hand?
Shomar’s uncomplicated world is tossed asunder when his best friend, Faerydae, shows up with a stray puppy and a woman who steals the heart of his soul the moment he looks at her. Only to discover Faerydae and the woman claim they can’t stand each other, yet his intuition tells him otherwise. Will Shomar be able to win the woman of his dreams or will Faerydae always have her heart?
Will Tessla find her freedom? Will Faerydae keep his, or will Shomar succeed in his plan to expose them to their hidden ecstasy?
Publisher H.A.W.K. Publishing
Amazon http://bit.ly/amznEE3
Barnes and Noble http://bit.ly/EEPM3BN
Kobo http://bit.ly/EEKobo
Smashwords:- http://bit.ly/swordsEE3
Amazon http://amzn.to/1M1GCak
Createspace http://bit.ly/EEPrintCS3
Barnes and Noble http://bit.ly/PrintEE
Book Depository http://bit.ly/ee-BD
Books-A-Million http://bit.ly/EE-BAM 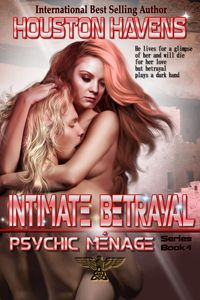 Author Houston Havens
Book heat level (based on movie ratings) R
Kindise Wyatt escapes her Star Rider captor and returns to Earth. With the help of a sexy Old World Mole and his mysterious friend, she's determined to uncover the whereabouts of her lover. Instead, she finds nothing but betrayal and her captor in pursuit.
On the lam after betraying his evil ruler, ex-Dirt Dweller and drifter Jaden Valenti confirms his name is on a hit list. Finding what he believes will be safety amongst the Airbornes, he recreates himself and hides his past until trouble walks back into his life in the name of Kindise Wyatt, the woman he was ordered to assassinate and didn't.
Due to the obsessions of a Fae woman Sori gave up his hard-earned royal title and left his homeland of Elfame. Love is the furthest thing from his mind until he is sent in Jaden's place to pick-up some cargo...human cargo in the form Kindise Wyatt. He feels the Fae magnetism of his soulmate in her. Problem is; she's in love with someone else.
Will Jaden fulfill his orders to kill Kindise and get his name removed from the list, or will his secret be exposed and betray the friendship he has with Sori? Does Sori help Kindise find her lover, or will a love between them have a chance to flourish before a fatal attraction and a determined captor rip their love asunder? Will Kindise find true love or will betrayals at every turn crush the fight out of her? Can she find her inner strengths to keep fighting and lead The Freedom Fighters to defeat the Dirt Dweller elites, once and for all?
Publisher H.A.W.K. Publishing
Amazon http://amzn.to/1KKtg1t
Barnes and Noble  http://bit.ly/1l3EIQz
Kobo http://bit.ly/1MkFguN
Smashwords http://bit.ly/1Oce6qx