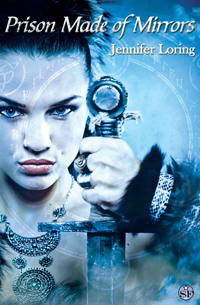 Welcome Jennifer Loring author of Prison Made of Mirrors, a new dark fantasy/paranormal romance.
Why did you write this book?
I started it many years ago, after being inspired by Tanith Lee’s wonderful White as Snow. Fairy tale retellings have always been one of my favorite things to write; this novella is an homage to one of my biggest influences, who unfortunately passed away in 2015.
What is your favorite genre to read?
It will probably always be horror, though I do read some romance (mostly PNR and historical). I also love non-fiction.
Who is your favorite character from fiction (not including your own)?
Two are characters I’ve loved since I was a teenager—Irrylath from The Darkangel Trilogy by Meredith Ann Pierce and Zach from Poppy Z. Brite’s Drawing Blood. I also adore Constantine from Robin McKinley’s Sunshine. Two out of three are vampires, so I guess that says a lot about me. J
What are you working on at the moment?
A Gothic/paranormal romance novella for After Glows Publishing, concepts for a narrative game, and a lot of short fiction. I probably won’t work on a novel-length project again until 2018, though I’ll likely write another novella this year.
What books will we see from you in coming months?
April will bring the final book of The Firebird Trilogy (The Pieces of Us) from Limitless Publishing; the fairy tale anthology Forest Seclusion, featuring my transgender romantic fantasy story “If Only You Were Someone Else,” from Supposed Crimes; and the first Erotikós anthology—containing two of my erotic horror short stories—from DarkFuse. In May, I’ll be in a contemporary romance anthology called Craving: Bad, and later in the year, I’ll appear in Crystal Lake Publishing’s Tales from the Lake vol. 4. I still have quite a few short stories, novellas, and novelettes submitted to various publishers, so hopefully this list will be updating soon!
Please tell us about your latest book.
Genre: dark fantasy/paranormal romance
Book heat level (based on movie ratings): PG-13
Aithne is a warrior kidnapped from her homeland during a Viking invasion and forced to marry her captor. Shortly before the raid that claims his life, she becomes pregnant with a child whom she believes cursed. Spurred by the dark sorcery she learns from relics her late husband’s mother left behind—including a magic mirror—Aithne descends into a madness that threatens not only her child’s life but also the lives of everyone around her.
Exiled by her mother, Brenna is taken in by a clan of dwarves who treat her like their own. They soon learn that no one is immune to Aithne’s lunacy—not even the prince to whom Brenna was once betrothed. Brenna must face and conquer death itself if she is to save the land that rightfully belongs to her, and to break her mother’s terrible spell on the man she loves.
Publisher: http://vagabondagepress.com/
Amazon https://www.amazon.com/dp/B06WLLL6QB
Barnes and Noble http://www.barnesandnoble.com/w/prison-made-of-mirrors-jennifer-loring/1125791749

Jennifer Loring has been, among other things, a DJ, an insurance claims assistant, and an editor. Her short fiction has been published widely both online and in print; she has worked with Crystal Lake Publishing, DarkFuse, and Crowded Quarantine, among many others. Longer work most notably includes the contemporary/sports romance series The Firebird Trilogy and the critically acclaimed psychological horror novella Conduits. She lives in Philadelphia, PA with her husband, their turtle, and two basset hounds.
Website: http://jennifertloring.com
Twitter: https://twitter.com/JenniferTLoring
Facebook: https://www.facebook.com/JenniferTLoring
Pinterest: https://www.pinterest.com/jennifertloring
Goodreads: https://www.goodreads.com/author/show/1493991.Jennifer_Loring
Amazon Author Page: http://www.amazon.com/author/jenniferloring
Newsletter: https://app.mailerlite.com/webforms/landing/o0f0h3
Instagram: https://www.instagram.com/jennifer_loring