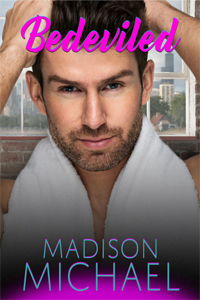 Welcome Madison Michael author of Bedeviled, a new contemporary romance.
Why did you write this book?
When I started the first book in the Beguiling Bachelor series, "Bedazzled", I did not intend to write a series. The characters and the relationship of these four friends and their stories came to life in my head until I could not stop writing about them. We have all seen people who have so much power or wealth that they cannot be sure they are loved for themselves. These four men know that they can count on each other because they are all equally successful. I liked them despite their fortunes and I wanted to show that with all they had, they were still vulnerable. I thought their stories were worth telling. When I finished the first novel, the story of Randall and Sloane was already begging to be written, so I finished "Beholden." By then I knew Alex would meet Charlotte in "Bedeviled" and I was setting the stage in all the books for the final book in the series.
What is your favorite genre to read?
Historical Romance. I think I learn more about history from romance novels than I ever learned in school. I love learning about other times, what is happening politically and culturally, and I love the clothes and manners.
Who is your favorite character from fiction (not including your own)?
I adore MacKayla Lane from the Fever Series by Karen Marie Moning. She starts out a rather feather-headed bimbo but over the course of the series she discovers her smarts and her strength. I love the way Mac survives trials and tribulations with fortitude and even humor. Besdies all that, the heat between her and Barrons sizzles.
What are you working on at the moment?
I am just starting the fourth and final book in the Beguiling Bachelors series. I introduced readers to four dashing men in "Bedazzled" and I have been hinting at the relationship between Tyler and Regan for three novels. It is time to tell the fourth story and close the book on these two.
What books will we see from you in coming months?
If nothing gets in my way, I have a time travel book, or perhaps short story, that I have been dying to write. I think it will be next, but recently, with all the divisiveness around politics in America, I have a political story that just started rattling around in my conscience. If I am lucky, and diligent, they should both come out this year.
Please tell us about your latest book.
Genre Contemporary Romance
Book heat level (based on movie ratings): R (for language and open door sexual encounters)
Charlotte is on the run…
Charlotte Roche has escaped dangers threatening her Boston life by accepting a job in Chicago. She dons a new name and a new personal for a new beginning – but it is all built on lies. Thinking she is safe, Charlotte drops her guard and sets her sights on her ruggedly handsome and wildly sexy running partner, Alexander Gaines. Can she advance their relationship from the track to the bedroom and still maintain her charade? Alex is wising up to her and she fears that his probing questions will pierce her carefully rehearsed story.
Alex, with unrevealed secrets of his own, struggles to hold the irresistible Charlotte at arm's length until Charlotte sustains a suspicious injury. Alex seizes the opportunity to cuddle up to the sassy beauty, risking discovery as well as his reputation, his fortune, and his friends, not to mention his heart. Their pasts are closing in on them forcing them to appeal to their friends, characters you've met and loved in "Bedazzled" and "Beholden". Can they build a bond with deceit on both sides? Join them as they tackle the maze of half-truths and cover-ups threatening their relationship and discover if their love is heavenly or bedeviled.
Amazon: https://www.amazon.com/gp/product/B06WLQL2FT/

Madison Michael traded 28 years in Fortune 500 tech and management positions for a chance to spend her days with sassy heroines, sexy, rich heroes and nothing but happy endings. Growing up the daughter of a librarian, she learned to love books, especially classics and romances, and spent winters cuddled under blankets losing herself in books.
Madison is the author of three novels in the Beguiling Bachelor series, as well as several short stories. She is a member of Romance Writers of America.
After living in the northeast, southeast and the west, Maddy returned to her Midwest roots. She lives in Evanston, IL with her feline editorial assistant and great views of Chicago's famous skyline.
Website http://www.madisonmichael.net
Blog http://www.madisonmichael.net/blog
Twitter https://twitter.com/madisonmichael_
Facebook https://facebook.com/madisonmichaelromance
Pinterest https://pinterest.com/madisonmich039
Goodreads: https://www.goodreads.com/author/show/15221601.Madison_Michael
Amazon Author Page https://amazon.com/author/madisonmichael
Posted by Kayelle Allen at 7:05 AM