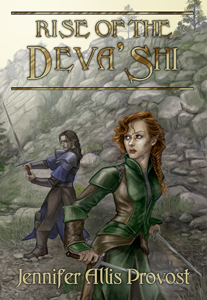 Welcome Jennifer Allis Provost author of Rise of the Deva'shi, a new fantasy romance.
Why did you write this book?
There's no better way to put it--I had to. The main characters in this book--Latera and Aeolmar--are the first characters I created with the intent of writing a book. Their current incarnations hardly resemble the rough sketches and outlines I started out with; like any good characters, they told me their story, and I just wrote it down. They were full of surprises, but the core of the story, and their strong relationship, remained the same.
What is your favorite genre to read?
Fantasy and romance
Who is your favorite character from fiction (not including your own)?
Jamie Fraser from Outlander
What are you working on at the moment?
I'm working on the sequel to Rise of the Deva'shi, Golem, and a new paranormal romance set in Scotland, Gallowglass.
What books will we see from you in coming months?
Changing Fate (contemporary romance) releasing March 28, 2017
Gallowglass (paranormal romance) releasing June 6, 2017
Golem (Parthalan #4) (fantasy romance) September 2017
Please tell us about your latest book.
Genre Fantasy, romance
Book heat level (based on movie ratings): PG13
A stolen girl. A legendary champion. A plan that might destroy Parthalan once and for all…
Aeolmar, First Hunter of Parthalan, leads a solitary life. Having long since abandoned his quest to kill Mersgoth--the demon that murdered his family--Aeolmar moves through his days with cold efficiency. Everything changes when he leads a training mission in Brennus, where he's attacked by Mersgoth himself, and saved by an unlikely heroine.
Latera, first born and heir to Gannera's throne, is kidnapped and left for dead in Parthalan's vast forests. A lone human amongst Parthalan's fae, she makes a home in Brennus, and lives a quiet life--until she finds herself defending a wounded First Hunter from a clutch of demons.
Back in Parthalan, Harek warns Asherah of something called the deva'shi--a warrior loyal only to the demon lord, Asgeloth. Both Aeolmar and Latera suspect that there is more to this deva'shi than what Harek has told them, but before they can learn the truth, Parthalan's borders are attacked. Will Aeolmar and Latera be able to stop the deva'shi in time, or is it a distraction to hide Harek's true plans?

Jennifer Allis Provost writes books about faeries, orcs and elves. Zombies too. She grew up in the wilds of Western Massachusetts and had read every book in the local library by age twelve. (It was a small library). An early love of mythology and folklore led to her epic fantasy series, The Chronicles of Parthalan, and her day job as a cubicle monkey helped shape her urban fantasy, Copper Girl. When she’s not writing about things that go bump in the night (and sometimes during the day) she’s working on her MFA in Creative Nonfiction.
Website https://authorjenniferallisprovost.com/
Twitter https://twitter.com/parthalan
Facebook https://www.facebook.com/copperraven/
Pinterest https://www.pinterest.com/jennallis/
Goodreads https://www.goodreads.com/author/show/2975887.Jennifer_Allis_Provost
Amazon Author Page https://www.amazon.com/Jennifer-Allis-Provost/e/B003LXSUFU/
Newsletter https://authorjenniferallisprovost.com/contact/
Posted by Kayelle Allen at 7:05 AM