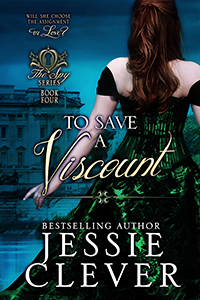 Welcome Jessie Clever author of To Save a Viscount, a new Regency romance.
Why did you write this book?
I wrote this book because Lady Margaret Folton insisted I do so. Maggie was a character that popped in an earlier book in this series, and she had such a fascinating story, I knew she would require a book of her own. So here it is.
What is your favorite genre to read?
I love historical fiction. It's so important to study history and learn from the things of the past. Historical fiction is a great way to introduce new topics and subjects to readers, and I love the power it has to encourage a love of history.
Who is your favorite character from fiction (not including your own)?
I love and hate Lisbeth Salander from the Girl with the Dragon Tattoo series. She stays true to her character right through to the end even when she makes you cringe. She's so beautifully written it's stunning. It literally takes my breath away when I see how brilliantly she's written.
What are you working on at the moment?
I have begun drafting the follow up series to the family of spies found in the Spy Series. This series is called the Shadowing London Series and will focus on the children of the Black family of spies.
What books will we see from you in coming months?
I plan to release the first book in the Shadowing London Series, a late Regency/early Victorian historical romance focusing on Samuel Black, the oldest of the Black family off spring, this fall!
Please tell us about your latest book.
Genre Regency romance
Book heat level (based on movie ratings): R
When an assassin threatens England's spy network, Lady Margaret Folton must find the killer before it's too late. Hardened from being forced to witness the murder of her British spy parents by French revolutionists, Margaret approaches this mission like any other, with steely determination and a resolute focus on the necessary outcome at the cost of all else.
Commodore John Lynwood, newly returned from the Mediterranean, finds himself granted the title of viscount in honor of his service during the war. Plagued with a string of good luck throughout his life, the title serves as another reminder that Jack has done nothing to earn the glory and prestige that comes with his position, and he'll be damned if he'll enjoy such an honor.
But when Jack is accidentally granted a title meant to be used as bait to lure the assassin into the War Office's trap, Margaret must face the tragedy of her past and decide which is more important: the assignment or love?
The books in the Spy Series:
1/2. Inevitably a Duchess (A prequel novella)
1. Son of a Duke
2. For Love of the Earl
3. A Countess Most Daring
4. To Save a Viscount
Amazon http://amzn.to/1tddN6P
Barnes and Noble http://bit.ly/1otXb34
Kobo http://bit.ly/1zHa0gJ
Smashwords http://bit.ly/1qCRsu2
iBooks http://bit.ly/1pjfhe7
Google Play http://bit.ly/10FAmFc

Jessie decided to be a writer because the job of Indiana Jones was already filled.
Taking her history degree dangerously, Jessie tells the stories of courageous heroines, the men who dared to love them, and the world that tried to defeat them.
Jessie makes her home in the great state of New Hampshire where she lives with her husband and two very opinionated Basset Hounds.

Email ThisBlogThis!Share to TwitterShare to FacebookShare to Pinterest
Keywords: author interviews, Jessie Clever, Regency Romance, To Save a Viscount