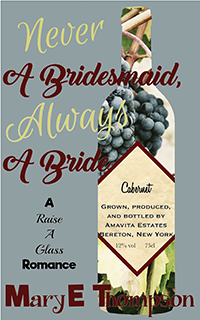 Welcome Mary E Thompson author of Never A Bridesmaid, Always A Bride, a new contemporary romance.
Why did you write this book?
There are constantly stories running through my head. I have enough ideas to keep me busy for the next few years. But this story… titles come to me first. I thought of the title and it kept going from there. A woman who had multiple failed marriages, but no one she was close to who asked her to be a bridesmaid. A woman who got married again and again, and again, for different reasons, but always felt alone. I wanted to help her find happiness.
When I added in the Finger Lakes area of New York, a spot that's the picture of small town America, it all fell together. Throw in a big family, a quirky matriarch, and lots of wine, and you've got a story!
What is your favorite genre to read?
Contemporary romance. I enjoy reading about people I feel I can relate to.
Who is your favorite character from fiction (not including your own)?
I confess, I'm a sucker for a superhero. If we're talking general fiction, I'd have to say Captain America is my favorite. He's the quintessential good guy. Protector. Lover, but sometimes a fighter. And sexy.
If we're sticking to books, I'd have to say Bailey Moore from My Kind of Wonderful by Jill Shalvis. My Kind of Wonderful came out two months after I finished chemo treatments for Hodgkin's Lymphoma and, without giving too much away, I connected with Bailey. She was strong and determined and ready to take on the world. She was done letting anything hold her back, and I admired the hell out of her for that, even though she's fictional!
What are you working on at the moment?
My next release, Curvaceous and Captivating, is my current focus. It's almost finished and will be available next month.
What books will we see from you in coming months?
There is more coming in this series, Raise A Glass, as more cousins find their happily ever after. The next book will be out May 30. I'm also continuing my Big and Beautiful series. The eleventh book releases April 18.
Please tell us about your latest book.
Genre Contemporary Romance
Book heat level (based on movie ratings): R (for language and open door sexual encounters)
Alyssa Morgan thought she'd never set foot on her family's vineyard again. Fifteen years was a long time to be away, but not nearly long enough when she has nothing to show for her time. Unless you'd count three failed marriages, two parents she barely spoke to, one disastrous attempt at a college degree, and zero friends to count on.
Jake Monroe thought about leaving Amavita Estates many times after Alyssa left him. Over the years, her family became his family. They accepted him. Loved him. Healed him. Her family was the family he never had, and without her around to remind him otherwise, he could pretend he was one of them.
Until she walked back into his world looking nothing like the girl he used to know.
Alyssa knows she needs to stay away from Jake. Jake wants nothing to do with her. But the chemistry that drew them together fifteen years ago is stronger than they are.
Especially when Jake glimpses the vulnerability she's trying to hide. His old protective instincts kick in. He wants to soothe her old hurts, and maybe her new ones, too. But Jake doesn't know if he can move beyond their past to be friends, let alone what he thought they would become. And Alyssa doesn't know if she can lean on him again when there's still another woman in his life.
Amazon https://www.amazon.com/dp/B01MQVF79A
Barnes and Noble http://www.barnesandnoble.com/w/never-a-bridesmaid-always-a-bride-mary-e-thompson/1125323279?ean=2940153908359
Kobo https://www.kobo.com/us/en/ebook/never-a-bridesmaid-always-a-bride
Smashwords https://www.smashwords.com/books/view/689227

Mary E. Thompson grew up loving to read, like a good little girl. Many nights she would fall asleep with the flashlight still turned on as she hid under the covers trying to finish the last few pages of a book. As an adult, the light from her ereader means she doesn't need a flashlight, but she still stays up way too late to finish a book.
When Mary's not reading, she's playing with her two kids or living out her own real life romance novel with her hubby. She has a weakness for chocolate, especially when it's paired with peanut butter, and has been known to have a bad day just because there's no chocolate in the house. Unless there's wine. Then everything is okay.
Mary grew up in Buffalo, New York and swears she's the only local to never ski or snowboard. Soccer was always her sport, with a couple adventures white water rafting and skydiving to keep things interesting. Mary moved to South Carolina for college but missed Buffalo every day. Yeah, she thinks she's crazy, too. She somehow convinced her South Carolina born and bred hubby to return to Buffalo to raise their kids and live out their lives. He's still not sure what he was thinking.
Website http://maryethompson.com
Blog http://maryethompson.com/blog
Twitter https://twitter.com/authormet
Facebook https://facebook.com/authormaryethompson
Pinterest https://pinterest.com/metdaisy7
Goodreads https://goodreads.com/maryethompson
Amazon Author Page https://amazon.com/author/maryethompson
Newsletter http://maryethompson.com/fiction-free/