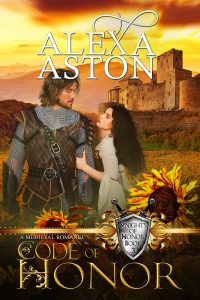 Welcome, Alexa Aston, author of Code of Honor (Book 3 Knights of Honor), a new medieval romance.
Why did you write this book?
This historical romance continues my series on medieval knights. Dragonblade Publishing has extended the series from 6 to 10 books since it's proving so popular with medieval readers!
What is your favorite genre to read?
I love a great thriller with bits of history thrown in. Steve Berry does a fantastic job of this.
Who is your favorite character from fiction (not including your own)?
Miss Elizabeth Bennet from Pride and Prejudice is the sister of my heart.
What are you working on at the moment?
I'm hard at work on Journey of Honor, the 4th book in my series. It will come out in late June this year.
What books will we see from you in coming months?
Besides Journey of Honor, I'll release Book 5 in The Knights of Honor. Heart of Honor releases in late October.
Please tell us about your latest book.
Genre: medieval historical romance
Book heat level (based on movie ratings): PG-13
1365 A.D. - After the Earl of Sandbourne banishes his supposedly unfaithful wife to a convent, his young son Michael swears never to set foot on the family's estate until after his father's death. Michael will then claim his title as the new earl and restore his beloved mother to a place of honor.
Fifteen years pass, and the now-knighted Sir Michael Devereux serves Lord Geoffrey de Montfort at Kinwick Castle. He accompanies the nobleman and his family to a wedding, where Michael unknowingly falls in love with the bride before he even knows her identity.
Lady Elysande Le Cler is angry that her usually indulgent father went against her wishes and betrothed her to a stranger prior to his death. Now as her wedding day approaches, dread fills her—until she meets a dashing stranger who helps her deliver a foal. Elysande loses her heart to this knight, frustrated that they can never be together.
Join Michael and Elysande as they find fate has other plans in store for them.
Amazon: https://www.amazon.com/dp/B06X6K3456/

Alexa Aston's historical romances use history as a backdrop to place her characters in extraordinary circumstances, where their intense desire for one another grows into the treasured gift of love.
She is the author of The Knights of Honor, a medieval romance series that takes place in 14th century England during the reign of Edward III and centers on the de Montfort family. Each romance focuses on the code of chivalry that bound knights of this era.
A native Texan, Alexa lives with her husband in a Dallas suburb, where she eats her fair share of dark chocolate and plots out stories while she walks every morning. She enjoys reading, watching movies, and can't get enough of Fixer Upper or Game of Thrones. Alexa also writes romantic suspense, western historical, and standalone medieval novels as Lauren Linwood.