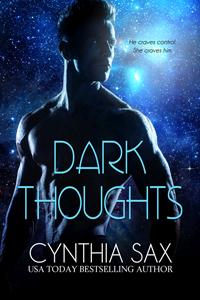 Welcome Cynthia Sax author of Dark Thoughts, a new SciFi Romance.
Why did you write this book?
When I first met Kralj, the hero of Dark Thoughts, during Chasing Mayhem, I knew I had to write his story. Kralj is Ruler of the Refuge, a settlement that many of the most violent beings in the universe call home. He can read minds, can control beings with his thoughts and has a very dark beast-like side of him. He EATS his enemies. Yeah, he goes there.
I only write romance so, of course, that got me thinking, "What type of female would love a male like that?" Dita, a pint-sized assassin, is as unique as Kralj is. She is as strong as he is yet has a cheerfulness that offsets his grim demeanor.
Note: Dark Thoughts is a standalone. It is not necessary to read Chasing Mayhem first.
What is your favorite genre to read?
I love all sorts of romance. Give me a happy romantic ending! I gobble that up. I read everything from sexy Regency Dukes to tormented half man, half machine cyborg warriors.
Who is your favorite character from fiction (not including your own)?
In the SciFi Romance space, I really like Ral, the Zorn warrior in Laurann Dohner's Ral's Woman. That was my first Laurann Dohner story and I loved it. Ral is an awesome beastly hero. Beauty and the Beast is my favorite romance premise. If there's beast in the book description, the writer has me.
What are you working on at the moment?
I'm writing the follow up story to Dark Thoughts (releasing in July). The hero will be Orol, Kralj's winged second-in-command. He has been given a solo mission. His heroine, of course, isn't cooperating with that mission. (grins) It is never easy for our heroes, is it?
What books will we see from you in coming months?
Ghost Of A Machine, my next standalone cyborg romance, will be releasing in May. He's a severely damaged hero and has earned his happy ever after.
The next story in the Dark Thoughts series will be releasing in July.
Please tell us about your latest book.
Genre Sci Fi Romance
Book heat level (based on movie ratings): R
Can love redeem a monster?
The Refuge is home to some of the most violent beings in the universe. Kralj, its leader, reigns over the remote outpost with terrifying ease, ruthlessly squashing any rumors of rebellion, killing anyone who breaks his rules. Primitive, deadly, powerful, he's a monster, scarred both on his face and his soul. He has never met a being he couldn't control.
Until he meets her.
Dita has one mission—to kill the three targets claiming sanctuary within the Refuge. Or so she claims. For the first time in his long lifespan, Kralj isn't certain of another being's intentions. The tiny assassin is immune to his powers, her thoughts unreadable. He can't predict her movements, can't control her, can't stop wanting her.
Dita is rare, as unique as he is, and, to keep the residents of the Refuge safe, Kralj will have to kill her. But first, he'll touch her, taste her, show her how passionate the beast inside him can be.
Dark Thoughts is a STAND-ALONE SciFi Romance.
The hero might be tall, dark, and scarred but don't be fooled by his appearance.
He's truly a monster.
This story is not for readers with delicate sensibilities.
Publisher http://cynthiasax.com/refuge/
Amazon https://www.amazon.com/Dark-Thoughts-Refuge-Book-1-ebook/dp/B01MRAABGC/
Barnes and Noble http://www.barnesandnoble.com/w/dark-thoughts-cynthia-sax/1125580992
Kobo https://www.kobo.com/us/en/ebook/dark-thoughts-3
Smashwords https://www.smashwords.com/books/view/699393