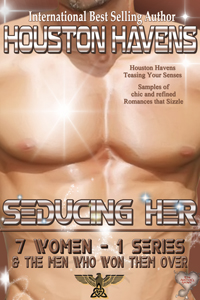 Seducing Her
The brilliant, multi-layered, bestselling author, Houston Havens thrills your senses with this 282-page teaser book. It includes only the first 4 chapters of each of the first 4 books in this series. This is not a full book - it's meant to provide a sample, and it's free on Kindle Unlimited.

4860 AD Earth. Humans had been warned yet refused to believe doomsday was at hand until it was too late to find sanctuary.
Since the beginning of humanity, an unseen presence guided human beliefs, actions, and lives. The Secret Blood Doctrine is the law the Dirt Dwellers Elites live by. They have their own goals and reasons for controlling the Earth. The humans were a means for accomplishing their goals, and a way to cover operating costs by culling them at the end of each cycle. At the arranged times, the Dirt Dwellers Elites withdrew to the Underworld with a few chosen ones to await the renewal.
Book 1: Sinful Surrender
Top psychic spy Fay Avalon suspects what she's remote viewed in her mind-travels and what her post-catastrophic dystopian government of the Underworld is stating as fact is a lie. In search of the truth, she escapes the Underworld, only to land in the arms of her enemy; the Airborne. Will she get the chance to uncover the secrets the Underworld is hiding before those on the surface, Logan and his brothers, discover who she is? Will they make her their wife or execute her as a spy?
Book 2: Phantom Desire
The search for truth continues with Fay's friend Chandra Lamar, but from a past she can't remember. A psychic vision pushes her to recall her purpose for being, but it's a ghost that awakens her desires for a life she fears she'll never have. Does Chandra find true love in the arms of the Nodin men or does her Phantom Desire forever own her heart? Will uncovering her true past expose the Underworld's deception?
Book 3: Exposed Ecstasy
Tessla Reto escapes the Underworld after finding the two men sent to help her dead. She's rescued by a handsome stranger…or is she? Faerydae's search for truth abruptly ends when a woman who stirs everything he's spent a lifetime denying falls into his life. Will Shomar be able to win the woman of his dreams or will a fairy always have her heart? Can the Underworld's long reach find Tessla, daughter of the ruler of the Dirt Dwellers, on the space station or will they find a way to draw her back to the surface?
Book 4: Intimate Betrayal
Kindise Wyatt is in search of her lover and escapes her Star Rider capture with the help of an Old World Mole. What she doesn't know is, his sexy but mysterious friend, Jaden Valenti is a Dirt Dweller with orders to assassinate her. Will betrayal crush Kindise's inner strength to help the Freedom Fighters defeat the Dirt Dweller Elites?

Houston Havens is a Bestselling romance author, a former successful model who enjoyed an adventurous jet-set lifestyle, a past she uses to set the world on fire with her erotic romance books.
She is a tenacious Irish lass, who strives to entertain with seductive stories created from her decadent imagination and traces of a provocative lifestyle she may or may not admit to. She intrigues her readers with a mix of the past, present, and future, and sexy blends of futuristic science fiction, paranormal fantasy, and western romance, always with love everlasting.
Her interest in the paranormal, fascination with quantum science, passion with myths, and the lure of her mysterious Celtic Irish-Druid bloodlines are combined with generally unknown truths, strange facts, and questionable fiction filled with passion and mystery.
She hopes her sultry stories will entertain and fascinate those who dare to take the journey. But don't be fooled by the glitz and glamour. Houston has a secret. At one time, she was an Acquisition Editor.
Website http://houstonhavens.com
Blog http://houstonhavens.com/blog
Twitter: https://twitter.com/HoustonHavens
Facebook: www.facebook.com/HoustonHavens
Newsletter signup: http://houstonhavens.com/vip/
Amazon Author Page - http://www.amazon.com/Houston-Havens/e/B00J1T0QY6/
Google+: https://plus.google.com/u/0/+HoustonHavens/
Tumblr: http://houstonhavens.tumblr.com
Booklikes: http://authorhoustonhavens.booklikes.com
Goodreads: https://www.goodreads.com/user/show/24819699-houston-havens
Pinterest: http://www.pinterest.com/houstonhavens/
Youtube: https://youtube.com/houstonhavens