The Pieces of Us Jennifer Loring @JenniferTLoring #RLFblog #contemporary #sportsromance 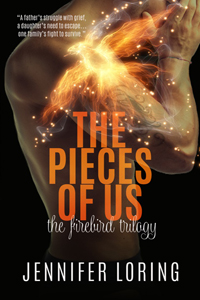 Welcome Jennifer Loring author of The Pieces of Us (The Firebird Trilogy Book 3), a new contemporary sports romance.
Why did you write this book?
From the time I finished Firebird, I knew Alex's story was going to be a trilogy; I just wasn't sure exactly how I wanted to end the journey of a character that has become so dear to me. I tossed around a couple of ideas but decided to go with the one I hoped readers were least likely to expect. Alex gets his HEA, but not in the way you might think. And while some readers might not like it, it's where the story needed to go.
What is your favorite genre to read?
It will probably always be horror, though I do read some romance (mostly PNR and some historical). I also love non-fiction.
Who is your favorite character from fiction (not including your own)?
Two are characters I've loved since I was a teenager—Irrylath from The Darkangel Trilogy by Meredith Ann Pierce and Zach from Poppy Z. Brite's Drawing Blood. I also adore Constantine from Robin McKinley's Sunshine. Two out of three are vampires, so I guess that says a lot about me. J
What are you working on at the moment?
A paranormal romance novella for After Glows Publishing and an outline for a narrative game/interactive novel. I wasn't going to work on a novel-length project again until 2018, but I couldn't resist the urge to re-start the PNR novel I initially researched and outlined over a year ago. The plot finally came together after a few false starts, and I'm excited about writing it again.
What books will we see from you in coming months?
April brings the fairy tale anthology Forest Seclusion, featuring my transgender romantic fantasy story "If Only You Were Someone Else," from Supposed Crimes, and the first Erotikós anthology—containing two of my erotic horror short stories—from DarkFuse. In May, I'll be in a contemporary romance anthology called Craving: Bad with a new Firebird short story, and in August, I'll appear in Crystal Lake Publishing's Tales from the Lake vol. 4. In October, I'll have a novella in After Glows Publishing's Hidden Demons paranormal romance anthology. I still have quite a few short stories, novellas, and novelettes submitted to various publishers, so hopefully this list will be updating soon!
Please tell us about your latest book.
Genre: contemporary/sports romance
Book heat level (based on movie ratings): R
Aleksandr Volynsky thinks he's experienced the worst life can throw at him, until the most devastating loss leaves him questioning everything…
One year later, Alex and his daughter, Anya, are still picking up the pieces. In the process, he realizes how far apart their mutual grief has driven them and how lonely he has become—especially when the Buffalo Gladiators' beautiful anthemist, Hannah Kent, finally introduces herself.
Anya Volynsky is a high-school senior with plans—her father's plans—to become the first woman on a professional hockey team's starting roster…
But Anya is toying with the idea of staying in Buffalo and caring for her father rather than accept a scholarship to play hockey at Boston College. Her decision becomes even more difficult when she meets her school's new athletic trainer, Lucas Donovan. Their experience with similar losses draws them together, and soon their friendship blossoms into a forbidden love that neither of them expected.
With lives torn apart by sorrow, Alex and Anya try to restore their bond, but it's not that easy…
Alex's attraction to Hannah keeps growing stronger, and he needs to decide if he's ready to overcome his pain—but also if he's willing to do it without Anya's approval. Anya, on the other hand, is headed for trouble, and while Alex tries to do the right thing in order to protect her, all he manages to do is push her further away.
Can Alex and Anya find the courage to pick up the broken pieces of their lives, or will the heartache of the past ruin their chances at finding happiness again?

Buy The Pieces of Us (The Firebird Trilogy Book 3)

Jennifer Loring has been, among other things, a DJ, an insurance claims assistant, and an editor. Her short fiction has been published widely both online and in print; she has worked with Crystal Lake Publishing, DarkFuse, and Crowded Quarantine, among many others. Longer work most notably includes the contemporary/sports romance series The Firebird Trilogy and the critically acclaimed psychological horror novella Conduits. She lives in Philadelphia, PA with her husband, their turtle, and two basset hounds.
Website: http://jennifertloring.com
Twitter: https://twitter.com/JenniferTLoring
Facebook: https://www.facebook.com/JenniferTLoring
Pinterest: https://www.pinterest.com/jennifertloring
Instagram: https://www.instagram.com/jennifer_loring
Goodreads: https://www.goodreads.com/author/show/1493991.Jennifer_Loring
Amazon Author Page: http://www.amazon.com/author/jenniferloring
Newsletter: https://app.mailerlite.com/webforms/landing/o0f0h3

Email ThisBlogThis!Share to TwitterShare to FacebookShare to Pinterest
Keywords: author interviews, Jennifer Loring, Sports Romance, The Pieces of Us