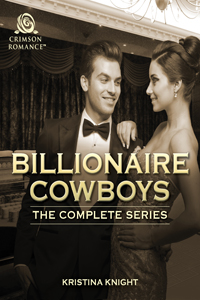 Play Is It True with today's guest Kristina Knight, author of The Billionaire Cowboys Trilogy, a Contemporary Romance. This is a game in which authors answer yes and no questions. They can elaborate on answers as much (or as little) as they choose.
First, tell us about your book.
Book heat level (based on movie ratings): R
The Billionaire Cowboys trilogy by best-selling author Kristina Knight kicks off with a seductive story of long-simmering feelings and hot Vegas nights.
What the Bachelor Gets
When Vegas Nightly names local property developer Gage Reeves as its sexiest bachelor, he's barraged with a stream of showgirls, local socialites, and entertainers who all expect something from him. But all Gage wants is to make a success of his new luxury shopping development.
Enter Callie Holliday. Callie dreams of having the hottest day spa in Vegas, but she's saddled with a bad location and an account balance full of zeroes. When she walks into a last-chance meeting with an angel investor and finds herself face to face with Gage, the childhood friend on whom she had a huge crush, she's not sure his reputation is the right match for her business. But then he offers her a storefront in his new high-end retail complex, and she has to admit it's a thoroughly tempting proposition. But feelings she thought were long buried threaten to turn their deal from strictly professional to decidedly personal.
It's risky business gambling on love.
What the Heiress Wants
Denver publishing heiress Miranda Clayton craves more from life than society parties and shopping sprees, but her tycoon father refuses to take her seriously. Her solution? Beat him at his own game by going to work for his top competitor, Connor Reeves, in Las Vegas.
Connor isn't fooled by Miranda's new plan for a second. He knows exactly who she is; what he doesn't know is why she's pulling him into her games. After their first meeting, Connor knows what he wants - Miranda in his bed! But the more he's around his new vice president, the more he wants something deeper than a short-term fling. The question is does the lady want Connor - or his business?
What the Gambler Risks
Twenty-something ice queen Sabrina Smith enjoys the fame and fortune she's found writing self-help books for a largely female audience. Her readers hang on every word of how the Vegas Virgin - an unflattering and inaccurate moniker given to her by a local shock jock - juggles dating, working, and friendships in Sin City.
And that's why Jase Reeves spells trouble.
Jase knows Sabrina's secret - that she's not nearly as cold as she would like people to think - and he's through keeping it. He didn't intend to have a one-night stand with the Vegas Virgin, but now he can't get her out of his head. And he can't keep living this lie.
With Jase back at the tables in Vegas, Sabrina has one goal: stay away from the handsome gambler before he melts her career - and her heart.
Now, tell us Yes or No for each answer below. Feel free to explain any (or none) of your answers.

this is your first book?
No, The Billionaire Cowboys Trilogy are my 12th, 13th, and 14th books respectively. It's my second series bundle!
this book is part of a series?.
Yes, there are 3 Billionaire Cowboys (Gage, Connor, and Jase) and they've been bundled into 1 book.
you lost sleep while writing this book?
Of course. Sometimes, the story just won't stop.
you did research for this book?
Yes, by visiting Las Vegas as often as possible (naturally.)
some characters in this book are not human? (pets for example)
Callie attempts to adopt a coyote. Yikes.
this book has more than one genre?
No.
you speak more than one language?
Sort of. I'm not fluent in Spanish, but I get the gist
you grew up where you live now?
No, although I did grow up near a lake and I live on a lake now.
you love to read?
Yes
you are never late?
No. That's a lie. I'm late quite often…unless I'm waaaay early.
you love pizza?
Yes.
you love sushi?
No. Blech.
you have a pet?
Yes, two dogs – Hazel and Angel
Where can we find your book online?
Publisher Simon and Schuster, Crimson Romance: http://www.simonandschuster.com/books/Billionaire-Cowboys/Kristina-Knight/9781507204429
Amazon http://amzn.com/B06W9HZ9LX
Barnes and Noble http://www.barnesandnoble.com/w/billionaire-cowboys-kristina-knight/1125783888?ean=9781507204429
iBooks https://itunes.apple.com/us/book/billionaire-cowboys/id1206952665?mt=11
Kobo https://store.kobobooks.com/en-us/ebook/what-the-bachelor-gets

Once upon a time, Kristina Knight spent her days running from car crash to fire to meetings with local police--no, she wasn't a troublemaker, she was a journalist. Her career took her all over the United States, writing about everything from a serial killer's capture to the National Finals Rodeo. Along the way, she found her very own Knight in Shining Cowboy Boots and an abiding love for romance novels. And just like the characters from her favorite books, she's living her own happily ever after.
Kristina writes sassy contemporary romance novels; her books have appeared on Kindle Best Seller Lists. She loves hearing from readers, so drop her a line.
Website: http://www.kristinaknightauthor.com
Facebook: http://www.facebook.com/kristinaknightromanceauthor
Twitter: http://www.twitter.com/authorkristina
Pinterest: http://www.pinterest.com/authorkristina/
Goodreads: https://www.goodreads.com/author/show/5827833.Kristina_Knight
Google+: https://plus.google.com/+KristinaKnightAuthor/posts
Amazon Author Page: http://www.amazon.com/Kristina-Knight/e/B0081LO6DM/