In preparation for the move from Blogspot to Wordpress, I'm sharing the RLF Gem Bloggers of this site. Each Saturday for the next few weeks, I'll showcase a different author.

Marilyn has appeared on the Romance Lives Forever blog seven times. She has been an RLF Gem multiple times and was on the list of Bloggers of the Year in 2014. The position is chosen by the amount of visits the author's post receives.
I'm proud to present Marilyn with the 2014 RLF Gem Award.
Others who won monthly top blogger awards in 2014 were Daisy Banks, Vicki Batman, E Ayers, and JD Faver. 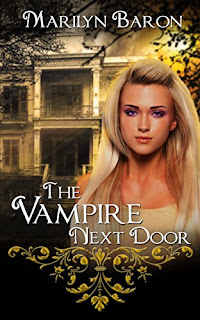 Marilyn’s 20th work of fiction, The Vampire Next Door, a paranormal romance, is now available for pre-order. The worldwide release date for the novel is June 9, 2017. Aurora Dawn Hale, the ravishing daughter and granddaughter of psychics, wants to take a bite out of the boy next door, reformed vampire Lancelot “Lance” Lakeland, who repents his past and desperately desires to be good. Lance has given up immortality to be with the woman he craves. He must convince Aurora Dawn he is worthy of her trust. Will she love him for who he is and leave her fiancé at the altar? Or wake up from her spell in time to recognize the evil presence of the fiend who has terrorized her family for centuries?
Preorder The Vampire Next Door https://www.amazon.com/dp/B071CSXPXM/

Coming next Saturday...Top Blogger for 2015. Come back and see who it is! Visit the new blog - still under construction: RLFblog. Since the hashtag is #RLFblog, that's the url for the new site. It will keep the name Romance Lives Forever.