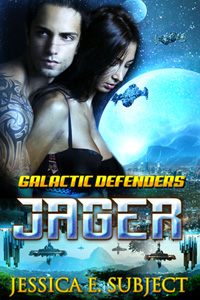 Genre SciFi Adventure Romance
Book heat level (based on movie ratings): R
Jager's new squad of Defenders has completed training, but the spoiled princess who has grated on his nerves since her first day of training is called back to Hemera for a yearly celebration. When Princess Katrina doesn't show up, Jager must find her and drag her home, where he wishes she would stay.
Katrina is a Defender, not a princess. And there is no way she wants to return to a planet she hates for some stupid ceremony. Not when she could be out killing Erebus with her squad.
But when a new enemy threatens both their lives, they must work together to survive.

Age: 20 Earth years
Gender: Female
Birthplace: Earth, though I was conceived on my mother's home planet, Hemera
Profession: I'm a Galactic Defender, not a Princess.
Species (for scifi/fantasy characters): My mother is Hemera and my father is Kalaren.
Please provide a physical description of yourself.
I can fit in on Earth better than most other Defenders. I have light brown skin with long, dark hair, and dark brown eyes. I'm fit. I need to be to bring down the Erebus. They're not exactly lightweights, and I prefer hand-to-hand combat rather than the plazers and bows the other Defenders use. I don't have an eyebrow ridge like my dad, but I do have the 'V' of freckles across my shoulders and down my back like my mom.
Please tell us a little about yourself.
I was born and raised on Earth. A couple years ago, my home was attacked by the Erebus. It was after a Galactic Defender arrived to help us that I found out the man who I believed to be my father wasn't my dad, and that I wasn't Terran. Turns out the Defender who arrived on Earth is my dad, my mom was the long lost princess of Hemera, and I haven't been on Earth since that day. But, I'm itching to go back. I know I can't stay there, but I just want to see what's changed, how my friends are doing.
Who is the significant other in your life?
I don't have a significant other, like a boyfriend. Jeff Bennett and I almost had a thing on Earth, but I had to leave the planet, and didn't get a chance to say goodbye. My squad leader, Jager, is hot, but we don't exactly get along. And then I have Jace, my best friend. He's the only Defender who has my back, so we spend a lot of time together. But, he's nothing more than a friend.
How do you dress?
I wear my blue Defender uniform. Though, sometimes when I'm training on my own, I'll wear a pair of leggings and a sports bra. If I lived with my parents on Hemera, I'd have to wear their royal garb. While the lehenga choli I wore for my mother's coronation was beautiful, it's not something I'd want to wear all the time.
Please tell us about your education.
I graduated from high school on Earth, though I didn't make the ceremony. I was supposed to go to university that fall, but wasn't on the planet to do so. While the Hemera council taught me a bit about Hemera culture, I've learned a lot about the races belonging to the Galactic Alliance as a Defender. I've also learned how to bring down an Erebus by hand. Not stuff I could have learned on Earth.
What kinds of things do you always carry (in pockets or purse)?
I don't have pockets or a purse—I have no need for them—but I carry my zuranium blade in a special pouch in my boot. It goes with me everywhere I go, because I never know when I'll meet up with an Erebus that needs to be taken out.
What is your family like?
They're great people, really, just a tad bit overprotective. My mom is now the Queen of Hemera. She's wonderful, and rules far differently than her father and brother did. The commoners are no longer starving and dressed in rags. Everyone works together for the good of the planet. And with the dome the Alliance installed for her, the planet no longer had to worry about an Erebus attack. My dad is a legend among the Defenders. I hope I can be half as good as he was. He was leader of Echo squad for many Galactic years, and killed more Erebus than I can ever imagine. Then there's my sister Gwenodyn. She's not really my sister, but my parents are raising her after the last Erebus attack on Hemera when her mother was killed. She's a sweetheart, but not when she uses her Mingot mind-reading abilities to get her own way.
When (if) you lie or are upset, what gives you away?
I scratch my arms. It's a habit I wish I didn't have, as it totally gives me away when I'm lying.
What would you like to tell your writer?
It would have been nice if you'd given me more than one friend. Though, I wouldn't trade Jace for the universe. And why is this book called Jager when it's supposed to be my story?

Jessica E. Subject is the author of science fiction romance, mostly alien romances, ranging from sweet to super hot. Sometimes she dabbles in paranormal and contemporary as well, bringing to life a wide variety of characters. In her stories, you can not only meet a sexy alien or two, but also clones and androids. You may be transported to a dystopian world where rebels are fighting to live and love, or to another planet for a romantic rendezvous.
When Jessica is not reading, writing, or doing dreaded housework, she likes to go to fitness class and walk her Great Pyrenees/Retriever her family adopted from the local animal shelter.
Jessica lives in Ontario, Canada with her husband and two energetic children. And she loves to hear from her readers. You can find her at jessicasubject.com.
Website http://jessicasubject.com
Blog http://www.markofthestars.com/wp/blog/
Twitter http://twitter.com/jsubject
Facebook http://www.facebook.com/pages/Jessica-E-Subject-author/205759796126370
Pinterest http://pinterest.com/jessicasubject/
Instagram https://www.instagram.com/jessicaesubject/
Goodreads http://www.goodreads.com/author/show/4959083.Jessica_E_Subject
Amazon Author Page http://amazon.com/author/jessicasubject
Newsletter http://eepurl.com/eX1Zw