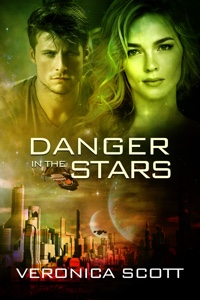 Welcome Veronica Scott author of Danger in the Stars, a new scifi romance.
Why did you write this book?
When I was writing Star Cruise: Stowaway for the 'Pets In Space' anthology last year, I had the premise of an empathic alien priestess stolen from her own world and sold to an interstellar crime syndicate, forced to do their bidding. In that novella, the story was about the woman's escape with the help of my ship's crew and two pets. When I finished writing that one, I started thinking about a sister, also held as a prisoner, but not lucky enough to escape. How would it be for her, to be in the midst of the criminal operations, trying to stay true to her own values, but forced to commit crimes? Who would help her? Conor, the hero, came into my head and said, "I will." He's a comple man of many secrets, but no spoilers from me!
What is your favorite genre to read?
I love science fiction romance, but I read voraciously, everything from Regency romances to romantic suspense with Navy SEALs.
Who is your favorite character from fiction (not including your own)?
I love Nalini Singh's Arrows in her Psy-Changeling series, and of that group, Judd is still my favorite.
What are you working on at the moment?
I've got two things going on – a paranormal novel set in ancient Egypt and a new scifi romance. I don't usually try to juggle telling two stories at once but the Egyptian tale came to me one night completely plotted and so I figured I'd better write it!
What books will we see from you in coming months?
In May I'll be releasing a volume of three scifi romance stories, which were previously only available in anthologies, and then of course the two new books I talked about in the previous question will come out in the summer.
Please tell us about your latest book.
Genre Science fiction romance
Book heat level (based on movie ratings): PG13
Miriell, a powerful empathic priestess, has been kidnapped from her own primitive planet along with a number of her people, and sold to the evil Amarotu Combine, largest organized crime syndicate in the Sectors. When she and her handler are sent to use her power to commit an assassination, she must leave behind her own sister as hostage to ensure her compliance. Miriell cannot ask for aid without endangering herself and others.
Despite his best efforts, Combine enforcer Conor Stewart is entranced by Miriell, and helps her evade the worst of brutal treatment from the rest of the mob. But Conor must keep his distance, before the lovely empath learns that he has secrets of his own–secrets that could get them both killed.
The situation becomes dire when Conor and Miriell come to the attention of both the Combine overlords and the deadly Mawreg, aliens who threaten the Sectors. Can she save herself and the Mawreg's next victims? And will Conor help her, or remain loyal to his evil bosses?
Amazon https://www.amazon.com/dp/B06Y2BP8JZ
Barnes and Noble http://www.barnesandnoble.com/w/danger-in-the-stars-veronica-scott/1126166316
Kobo https://www.kobo.com/us/en/ebook/danger-in-the-stars

Best Selling Science Fiction, Fantasy and Paranormal Romance author and "SciFi Encounters" columnist for the USA Today Happy Ever After blog, Veronica Scott grew up in a house with a library as its heart. Dad loved science fiction, Mom loved ancient history and Veronica thought there needed to be more romance in everything. When she ran out of books to read, she started writing her own stories.
Seven time winner of the SFR Galaxy Award, as well as a National Excellence in Romance Fiction Award, Veronica is also the proud recipient of a NASA Exceptional Service Medal relating to her former day job, not her romances! She recently was honored to read the part of Star Trek Crew Member in the audiobook production of Harlan Ellison's "The City On the Edge of Forever."