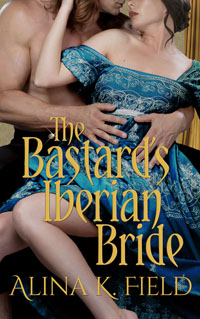 Welcome Alina K Field, author of The Bastard's Iberian Bride, a new Regency Romance.
Why did you write this book?
I had a secondary character in one of my earlier books who stuck with me and demanded his own romantic adventure. As it turned out, Bink Gibson was an illegitimate son of an earl who served as a spy lord for England during the Napoleonic wars. While I like all the titled gentlemen who populate the Regency world, I had a great deal of fun writing a character who doesn't quite fit in with his aristocratic father and siblings. The Bastard's Iberian Bride is the first book in a series I'm calling Sons of the Spy Lord.
What is your favorite genre to read?
I love historical romances, the more adventurous, the better.
Who is your favorite character from fiction (not including your own)?
If I may have two: William Doyle, who appears in several of Joanna Bourne's books, and is the hero of her book The Forbidden Rose, and Loretta Chase's Rupert Carsington, the hero of her book Mr. Impossible.
What are you working on at the moment?
I'm cleaning up Book 2 in the Sons of the Spy Lord series, doing final revisions.
What books will we see from you in coming months?
I'll be releasing the second book in this series in late summer 2017, and the third book around the end of 2017.
Please tell us about your latest book.
Genre: Historical Romance,
Book heat level (based on movie ratings): R
Daughter of spies
For a chance at true freedom, Paulette Heardwyn needs the fortune left her by her inscrutable father. But she doesn't know what it is, where it is, or how to find it, and the only man with answers, the Earl of Shaldon, takes his secrets to the grave. Worse, the dead earl tries to force her marriage to his bastard son—and leaves her prey to a traitor seeking the same treasure she's after.
Soldier, Steward, Bastard
Bink Gibson is ready to throw off his quiet life as steward to his old commander and head for India and the chance of prosperity. But before he can leave he's summoned to the deathbed of the Earl of Shaldon, a meddling spymaster, a complete stranger…and his father.
And the Earl has set a trap Bink will never be able to resist.
Amazon https://www.amazon.com/dp/B071D52388
Kobo https://www.kobo.com/us/en/ebook/the-bastard-s-iberian-bride
iTunes https://itun.es/i6759FF
Barnes and Noble http://www.barnesandnoble.com/w/the-bastards-iberian-bride-alina-k-field/1126282774?ean=2940157193805

Award winning author Alina K. Field earned a Bachelor of Arts Degree in English and German literature, but her true passion is the much happier world of romance fiction. Though her roots are in the Midwestern U.S., after six very, very, very cold years in Chicago, she moved to Southern California and hasn't looked back. She shares a midcentury home with her husband, her spunky, blonde, rescued terrier, and the blue-eyed cat who conned his way in for dinner one day and decided the food was too good to leave.
She is the author of several Regency romances, including the 2014 Book Buyer's Best winner, Rosalyn's Ring. She is hard at work on her next series of Regency romances, but loves to hear from readers.
Website http://alinakfield.com/
Twitter https://twitter.com/AlinaKField
Facebook https://www.facebook.com/alinakfield
Pinterest https://www.pinterest.com/alinakf/
Goodreads https://www.goodreads.com/author/show/7173518.Alina_K_Field
Instagram https://www.instagram.com/alinak.field/
BookBub https://www.bookbub.com/authors/alina-k-field