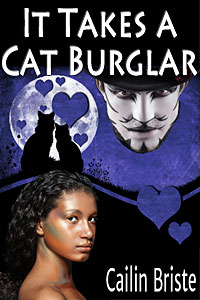 He's a thief, a cat burglar, training her to become his partner not his lover. She intends to steal his heart. Welcome Cailin Briste, author of It Takes a Cat Burglar, a new sci-fi romance.
Why did you write this book?
It Takes a Cat Burglar began with a prompt in a Goodreads group writing event. The characters wouldn't keep to the prompts story line, so I put it aside and wrote another story for the group. I had thought of including it in a boxed set, but when that fell through I decided to self-publish the novella. Now I intend to write additional A Thief in Love Romances and make a series.
What is your favorite genre to read?
If you go by the number of books on my kindle, historical romance wins by a landslide, Regency romance in particular. I love the fantasy aspect of many of these novels.
Who is your favorite character from fiction (not including your own)?
My favorite character comes from the Foreigner series by C. J. Cherryh. Bren Cameron is the only human allowed to interact with the Atevi. Humans landed on the Atevi planet after a disaster separated them from human space. He's supposed to be writing a dictionary that will allow the two species to talk effectively to one another. A difficult task because the Atevi are wired completely differently from humans. In the first book someone tries to kill him, and the entire series (20 books) is set in motion. I love his struggle to communicate, to find the words that have meaning to humans and Atevi, to keep the delicately balanced peace between the two species.
What are you working on at the moment?
My works in progress include a novella for the next SFR Shooting Stars anthology, the Cosmic Love Cabaret. It's the love story of Master Trey from the first Sons of Tallav book Shane: Marshal of Tallav. He was a Dom at the Opio Institute, a sex school, but now works at the Whip Hand, a BDSM club. He's been delegated the task of explaining dominance and submission to the newly hired creative director of the Whip Hand's cabaret.
I'm also about a third of the way into Rand: Son of Tallav, the third book in the Sons of Tallav series. It's the story of Randolph, the owner of the Whip Hand, and best friends of Shane and Maon, characters from the first two books. He's a sadist, so this book is taking a lot of thought.
What books will we see from you in coming months?
The Cosmic Love Cabaret boxed set will be available for pre-order in September and released in October.
Please tell us about your latest book.
Genre
Sci-fi Romance, Romantic Suspense
Book heat level (based on movie ratings): R
When Darcelle Lebeau throws off the invisible chains that keep her bound to her family, she discovers a new vocation. Tempted to enter the illegal playground of a man she nicknames Matou, she becomes a cat burglar in training. Deeply ensnared with each task he entices her to fulfill, she fails to discover his identity and true intentions.
Sebastian St. Croix, a wealthy businessman, has a dark side. He's a thief, a cat burglar who steals art and historical objects. For one year, he trains Darcelle to become his assistant, remaining incognito, observing her from afar. His admiration grows along with his desire for her with every phase-one challenge she completes. Phase two will test the limits of his control. Hands-on personal training? Yes. Sex? No. With his sister's happiness at stake, nothing, not even the tempting Darcelle Lebeau, can interfere with accomplishing the biggest break-in of his career.
Publisher Hot Sauce Publishing
Amazon https://www.amazon.com/Takes-Cat-Burglar-Thief-Romance-ebook/dp/B0727MJK45/