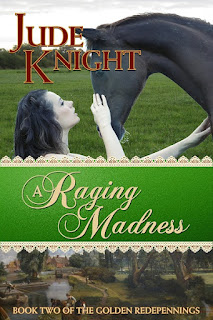 A Raging Madness, Jude Knight: counterfeit marriage, real enemies. Their marriage is fiction. Their enemies are real. Ella has survived abuse and scorn. Alex is a broken-down soldier. They must face their past to find their future.

Filters Are for Water and Coffee

Today's featured book is A Raging Madness, a historical romance by Jude Knight.
Ella survived an abusive and philandering husband, in-laws who hate her, and public scorn. But she's not sure she will survive love. It is too late to guard her heart from the man forced to pretend he has married such a disreputable widow, but at least she will not burden him with feelings he can never return.
Alex understands his supposed wife never wishes to remarry. And if she had chosen to wed, it would not have been to him. He should have wooed her when he was whole, when he could have had her love, not her pity. But it is too late now. She looks at him and sees a broken man. Perhaps she will learn to bear him.
In their masquerade of a marriage, Ella and Alex soon discover they are more well-matched than they expected. But then the couple's blossoming trust is ripped apart by a malicious enemy. Two lost souls must together face the demons of their past to save their lives and give their love a future.

Jude Knight's writing goal is to transport readers to another time, another place, where they can enjoy adventure and romance, thrill to trials and challenges, uncover secrets and solve mysteries, delight in a happy ending, and return from their virtual holiday refreshed and ready for anything.
She writes historical novels, novellas, and short stories, mostly set in the early 19th Century. She writes strong determined heroines, heroes who can appreciate a clever capable woman, villains you'll love to loathe, and all with a leavening of humor.
Website http://judeknightauthor.com/
Blog http://judeknightauthor.com/
Twitter https://twitter.com/JudeKnightBooks
Facebook https://www.facebook.com/JudeKnightAuthor/
Pinterest https://nz.pinterest.com/jknight1033/
Goodreads https://www.goodreads.com/author/show/8603586.Jude_Knight
Amazon Author Page https://www.amazon.com/Jude-Knight/e/B00RG3SG7I
BookBub https://www.bookbub.com/authors/jude-knight
Posted by Kayelle Allen at 7:05 AM