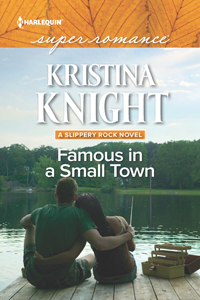 Welcome Kristina Knight author of Famous in a Small Town, a new Contemporary Romance.
Why did you write this book?
Famous in a Small Town is the first book in my new small town series, set in the fictional town of Slippery Rock, Missouri. I wanted to write about the kind of place where I grew up. I had this idea about what might happen to a few hometown football heroes, who were now back in their small town and figuring out what was next for them. And that's where the characters basically took over. I'm so excited for this series, not just because of the location (a small lake town in Missouri) but because the characters are so real to me. I hope readers fall in love with them, like I did.
What is your favorite genre to read?
I don't know that I have a favorite, although I probably read contemporary romances more than any other. But I love cozy mysteries, historicals, and I've found a renewed interest in memoirs the past few months. So, I guess my favorite genre is whatever I happen to be reading at this moment (and right now I'm reading a memoir and a contemporary at the same time!).
Who is your favorite character from fiction (not including your own)?
There are so many! I adore Mr. Darcy, and I have serious feelings for Inigo from The Princess Bride, and I can't leave out Justin from Diana Palmer's Long, Tall Texans series. . .I think my favorite, though, is Jo from Little Women. I always thought I was a little like her – a little too bookish, a little tomboyish, a little sarcastic. Although she does speak her mind much more often than I ever have. Hmm, maybe I need to be more like Jo!
What are you working on at the moment?
I'm finishing up book 4 in the Slippery Rock series, Levi and Camden's book, and I'll start on a novella for the series in another couple of weeks – yay, more Slippery Rock books!
What books will we see from you in coming months?
You're going to see all the Slippery Rock books! Famous is the first, and stars Collin Tyler and Savannah Walters. Then in July book two releases, Rebel in a Small Town, featuring Slippery Rock's acting sheriff, James Calhoun and Mara Tyler (Collin's sister). Then, in September, book 3 releases, Breakup in a Small Town. Book 3 features married-but-on-the-rocks Adam and Jenny. And then, in December, you'll get book 4, featuring Levi Walters (Savannah's older brother) and Camden Harris, a new arrival to town. And, I don't have a release date or a title yet, but Aiden, Adam's twin, will get his own novella some time in the fall. He'll be paired up with Savannah's wedding planner. Julia Colson.
Please tell us about your latest book.
Famous in a Small Town is a contemporary romance with a friends-to-lovers theme. Savannah is Collin's best friend's sister, and is running from a bit of a scandal. Collin has never run from anything in his life, so he doesn't understand A) why Savannah's back in town or B) why he can't stop thinking about a woman he knows won't be staying around for long. He is rooted very deeply in Slippery Rock, but he can't stay away from Savannah....
Book heat level (based on movie ratings): R
Forced to leave Nashville after a scandal, Savannah Walters has come home to Slippery Rock, Missouri, with a bruised ego and her singing career in jeopardy. As if that isn't humiliating enough, on her way into town she's rescued by her swoon-worthy childhood crush, Collin Tyler.
His hands are full running the family orchard and dealing with his delinquent teen sister, so Collin doesn't need to get involved with someone as fiery and unpredictable as Savannah. But the intense attraction between them can't be denied. And when disaster strikes, they'll both be surprised by who's still standing when the dust settles.
Publisher Harlequin - https://www.harlequin.com/shop/books/9780373640270_famous-in-a-small-town.html
Amazon http://a.co/1jaCIq4
Barnes and Noble http://www.barnesandnoble.com/w/famous-in-a-small-town-kristina-knight/1124742565?ean=9781488017032
iBooks https://itunes.apple.com/us/book/famous-in-a-small-town/id1161326169?mt=11
Kobo https://www.kobo.com/us/en/ebook/famous-in-a-small-town-1

Once upon a time, Kristina Knight spent her days running from car crash to fire to meetings with local police--no, she wasn't a troublemaker, she was a journalist. Her career took her all over the United States, writing about everything from a serial killer's capture to the National Finals Rodeo. Along the way, she found her very own Knight in Shining Cowboy Boots and an abiding love for romance novels. And just like the characters from her favorite books, she's living her own happily ever after.
Kristina writes sassy contemporary romance novels; her books have appeared on Kindle Best Seller Lists. She loves hearing from readers, so drop her a line!
Website: http://www.kristinaknightauthor.com
Facebook: http://www.facebook.com/kristinaknightromanceauthor
Twitter: http://www.twitter.com/authorkristina
Pinterest: http://www.pinterest.com/authorkristina/
Goodreads: https://www.goodreads.com/author/show/5827833.Kristina_Knight
Google+: https://plus.google.com/+KristinaKnightAuthor/posts
Amazon Author Page: http://www.amazon.com/Kristina-Knight/e/B0081LO6DM/