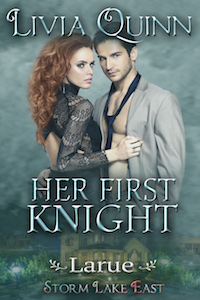 May sales of Her First Knight by Livia Quinn go to veterans charities.
He's a veteran and a billionaire with a passion for soldiers. But will it cost him everything? Her First Knight by Livia Quinn.
Today's featured book is Her First Knight, a military romance by Livia Quinn, a May fundraiser for veterans.
Billionaire ex-soldier and CEO, Ridge Romano's mission is to improve the lives of wounded veterans. With the big vote on his veterans bill coming up before Congress soon, how had he ended up on stage between two cover models with a hundred women shouting, "Take it off, Tucker!?" That's the question his family and friends would be asking tomorrow, that and "Who's Tucker?" If he can only slip away without repercussions.
Buffy Calloway's face and body were recognizable worldwide but the 'face' she's looking for is the face of her franchise. Interviewing cover models at the D.C. conference, she finds 'her man'. Tucker - the late arrival - has the 'je ne sais quoi' that will make her talent agency and photography studio an immediate success.
The Calloways have always known what they wanted and Buffy knows he's 'the one'. There's just one problem. Ridge laughs at the notion of himself as a cover model. He has more important priorities. Who is Buffy to argue with such a noble cause, but she's determined to show Ridge he has underestimated the influence of a vast romance community.
Her First Knight's Genre: Military Romance
Book heat level (based on movie ratings): PG-13
Publisher Campbell Hill Publishing
Amazon http://amzn.to/1UeiHuv
Barnes and Noble http://bit.ly/1N3sy0d
CreateSpace http://amzn.to/1UeiHuv
Goodreads http://bit.ly/24JBiFo
iBooks http://apple.co/2eH1ziE
Kobo http://bit.ly/1U46pX9