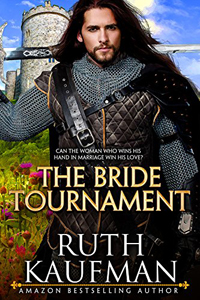 Today's featured book is The Bride Tourmanent by Ruth Kaufman.
Genre historical romance
Book heat level (based on movie ratings): R
Lady Eleanor de la Tour’s life turns upside down on her wedding day. Instead of her betrothed, she must wed the new earl, to whom the king has given his title and lands. Though Richard Courtenay is handsome and intriguing, she wants the man she loves and chose. And Richard pursues alchemy, anathema to her because the obsession to turn base metals into gold is destroying her father.
Richard needs and wants to stay wed to Eleanor to uncover her father’s alchemy secrets. He vows to win her even as she arranges a bride tournament to find him a better and willing wife. Can they attain what they most desire?
Publisher Ruth J. Kaufman
Amazon https://www.amazon.com/dp/B016YZEW0I/
CreateSpace http://amzn.com/0990846962

Ruth Kaufman is a Chicago Amazon bestselling author, on-camera and voiceover talent, freelance editor and speaker with a J.D. who enjoys chocolate peanut butter milkshakes and singing in a symphony chorus.
The Bride Tournament, the third standalone book in her Wars of the Roses Brides series, joins At His Command and Follow Your Heart. Writing accolades include Romance Writers of America® Golden Heart® winner and runner up in RT Book Reviews’ national American Title II contest.