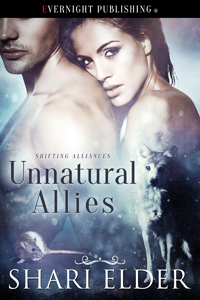 Welcome Shari Elder author of Unnatural Allies, a new Paranormal Romance. In an off-kilter world, a wolf and rat shifter find love in Shari Elder's Unnatural Allies. But a wolf and rat cannot mate, no matter the human attraction.
Why did you write this book?
Last year, Evernight published my novel, Shifter Trials. Although I had not planned for it to be part of a series, two of the secondary characters in the book—the wolf beta and heroine's best friend, and a rat alpha – started bucking for their own story. Then I fell in love with the idea of a love story between a rat and a wolf. I like to push at rules, and this story definitely does that.
What is your favorite genre to read?
I love science fiction, fantasy and paranormal stories, romance and non-romance. I just love to see how writers create new worlds, new rules of engagement, new species, and new cultures. It's why I write them as well. I also love mysteries. Like romances with their HEAs, mysteries have to tie up the story by the end as well.
Who is your favorite character from fiction (not including your own)?
I have to share two, because I always like to have to have a male and a female. The first is Samwise Gamgee from Lord of the Rings. He's not the hero, yet the final victory (and happy ending) would not have succeeded without him. He's the best friend, the sidekick, the shadow, on which the hero's success ultimately rests. He's a unique character, often overlooked, because his evolution is to become his best self, beyond what he thought he could be. And he gets the girl in the end.
The second is Ms.Jane Marple, because I adore the quiet, older character that everyone ignores. Yet it she who sees and hears everything, and ultimately is the only one who can figure it out. Reliable, loyal and kind, with depth and intelligence that comes out quietly in the acts of day to day life. Like Sam.
What are you working on at the moment?
I am working on a science fiction romance novel called the Scent of Memory, which is book 2 in my Green Rising Series. In this novel, a rebel computer genius is reunited with her fiancée, who she believed to be dead from a mining accident. Instead, he was rebuilt as a cyborg and had his memories wiped.
What books will we see from you in coming months?
In addition, to the Scent of Memory, I am also working on book 3 in Shifting Alliances, where shifters continue their battle against the fae (see blurb below). In this novel, a cougar shifter and a fae man find love. I also plan to write a holiday Hannukah story.
Please tell us about your latest book.
Genre: Paranormal Romance
Book heat level (based on movie ratings): R
A World in Transition
Violent fae encroachment on shifter land is heating up. With death tolls rising, the impossible becomes necessary – an alliance among predator and prey shifters.
An Inconceivable Love
Nicca Baron, lone wolf and wolf clan beta, finds herself under the command of Evan Grant, the rat alpha. In different circumstances, he'd be dinner. Or so her wolf keeps reminding her. Evan proves to be a perceptive leader, a skilled fighter and irresistible to her lonely heart.
To rule the rats, you have to rule the pack. Evan is a whiz at managing people and groups. Until he finds himself leading a mission made up of every single large animal that thrives on rat flesh. And not the kind between his legs. The only bright light is Nicca. Her storm gray eyes miss nothing, her brilliant mind comprehends everything and her succulent curves offer the perfect place for a rat to nestle.
An Impossible Future
In each other's arms, Nicca and Evan discover love and a new perspective in an off-kilter world. But a wolf cannot mate with a rat, no matter the strength of the human attraction.

Hello, I'm Shari. By day, I crawl out of bed, mainline coffee, walk the dog, get my kid off to school, hop on the metro, and save cities within the four walls of my office. Usually by email.
At night, the other Shari emerges. I take off the suit, curl up on the couch and let my imagination play, with words and images until stories take shape (while periodically checking on my teen-ager, hiding out in the bedroom and plotting world domination with her furry minions). As my alter ego, I save cities in a cape and spangled tights, wander space and time on a surfboard, fly over the Himalayas on feathered wings, make six-toed footprints in indigo talc snow on the sixth planet in the Andromeda galaxy or eavesdrop on Olympian gods while pretending to whip up a bowl of ambrosia.
In all these wondrous worlds, romance and passion blossom. I can't resist a happy ending. And I am particularly prone to writing happy endings for those who have given up on ever getting one.
Website http://sharielder.com
Blog http://sharielder.com/blog-2
Twitter http://twitter.com/ShariElderBooks
Facebook http://facebook.com/ShariElderStories/
Pinterest http://pinterest.com/ShariEldeBooks
Goodreads http://goodreads.com/ShariElder
Amazon Author Page https://amazon.com/Shari-Elder/e/B01IMME7K6/
Newsletter http://sharielder.com/blog-2 (sign up on my blog)