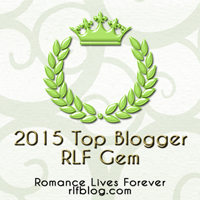 In preparation for the move from Blogspot to Wordpress, I'm sharing the RLF Gem Bloggers of this site. Each Saturday for the next few weeks, I'll showcase a different author.
2015 Star Blogger: Sabrina York
Sabrina has appeared on the Romance Lives Forever blog twenty-two times. She has been an RLF Gem multiple times and was Blogger of the Year in 2015. The position is chosen by the amount of visits the author's post receives.
I'm proud to present Sabrina with the 2015 RLF Gem Award.
Others who won monthly top blogger awards in 2015 were Collette Cameron, Paula Millhouse, Vicky Burkholder, KT Black, Rebecca Hunter, Mae Clair, KT Black, Susan V Vaughn, and Barbara White Daille.
Authors who appeared frequently during 2015 included Brita Addams, Cynthia Sax, Daisy Banks, DP Denman, Heather Boyd, Kim Iverson Headlee, Kristina Knight, and Lauren Linwood.
My thanks to each of them for making Romance Lives Forever a great place to find authors and books.

Susana and the Scot (Untamed Highlanders) 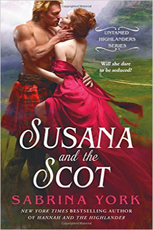 New York Times bestselling author Sabrina York carries readers back to the wild Scottish Highlands in Susana and the Scot, where the bravest of men surrender to no one-except the boldest of women...
Scotland, 1813.
A Scandalous Temptation
Andrew Lochlannach is famous for his conquests, on and off the battlefield. When a fellow warrior challenges him to a kissing contest, he wastes no time in planting his lips on ninety-nine lovely lasses-an impressive feat of seduction that gets him banished to the hinterlands. Still, Andrew has no regrets about his exploits-especially his embrace with the most beguiling woman he's ever met...
An Undeniable Passion
With flaming red hair and a temper to match, Susana is not some innocent farmgirl who gives herself over easily to a man, even one as ruggedly handsome as Andrew. The wicked Scot may have won a kiss from the headstrong beauty in a moment of mutual desire, but Susana refuses to be just another one of his conquests. Andrew must convince the fiery lass that even though he is not playing a game, losing her is not an option...
Amazon https://www.amazon.com/dp/125006970X/

Coming next Saturday...Top Blogger for 2016. Come back and see who it is! Visit the new blog - still under construction: RLFblog. Since the hashtag is #RLFblog, that's the url for the new site. It will keep the name Romance Lives Forever.