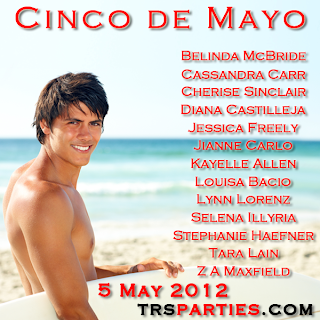 We're sharing excerpts, giveaways, and chatting with you!

We'll be at The Romance Studio party site all day long on May 5th, Cinco de Mayo, giving away goodies, gift certificates, books, and sharing excerpts, great videos, and recipes.

Here's a great recipe to get you started.

Caution: Product WILL BE HOT and may produce wetness in certain areas. For best results, serve with a bib or drool cloth.

Tell us about the main character in your current book. What is he like?

The man at the center of The Pirate's Game is, as one might assume, a pirate named James Gibbs. Quite probably he's the love child of Captain Jack Hartness of Doctor Who and Torchwood and Captain Jack Sparrow if the latter sobered up. In his world piracy is so organized there are several different kinds with their own turfs and rules of conduct, and he's one of the northern pirates' most cheeky captains. He gets the job put in front of him done, but he'll make a profit on the side and probably talk you into bed before you realize it's happened while he's waiting for his next cargo to load. Probably your friends too.
If your main character was here today, what would he say is his strongest point?
He'd grin like a lecher and tell you his point is very strong indeed, and he'd love to give you a personal demonstration.
Does he think he has a weakness? (If so, what does he think it is? What does his lover think it is? What does his enemy think it is?)
He knows exactly what his weakness is, which is caring about someone who can be hurt. That's exactly what his enemy thinks it is, and they've already used it against him. His next lover is a little harder to hurt, though, though he does come with some interesting strings.
What drives your hero to do the things he does? What makes him want to be the "good guy?"
Captain Gibbs has seen enough of the world and the pain it can bring to want to put things right where he can though also within reason. He takes care of his men and his ship, and he's smart about who he steals from and what he takes, but he knows he can't keep everyone happy and all the scales balanced. He's a realist, but he has a hopefully romantic heart beneath it all too. I think part of him hopes he can save the world someday even though he knows better.
What's your main character's favorite guilty pleasure?
He likes all pleasure, and he's not guilty about anything. Outside of sex, though, I think his most surprising indulgence would be a ravenous appetite for chocolate. That's not present in this book, but I promise you it's still there.
If you didn't know how old you were how old would you be?
Twelve. A very randy twelve.
A biography has been written about you. What do you think the title would be in six words or less?
James Gibbs, Randy Bastard
If money were not an object, where would you most like to live?
Ach, at the Ring, lass, though it'd be better if you came to stay with me.
Picture yourself as a store. Considering your personality and lifestyle, what type of products would be sold there?
In the front, the best and hardiest supplies for a long journey at sea, probably all stolen and sold to you at criminal markup. In the back, the dildos and straps enough to make a whore blush, and plenty of those in both genders to make the blushing that much more fun.
As a child, what was your favorite thing about school?
That there wasn't any.
Tell us an embarrassing story that has to do with a pet. If you have no pets, a story about a significant other will do. ^_^
Not so much for pets at sea. They start to look too tasty when w'been gone too long. There was this first mate once a'fore I was captain who liked to roll his trousers under his great belly while we was sailing if it got too hot. His arse weren't unpleasant t'look at, so I did my fair share o'peeking when the waist drifted south an' he couldn't let go of the lines and put matters to rights. But like I said, sometimes at sea food runs out or goes scarce, and while fat bellies grow tauter during a famine, trousers don't give a damn. Let's just say I was more than happy to be in the front when those knickers came down, and after I saw what the first mate had to offer, I made it my business to get a lot better acquainted with both his back and front sides.
If you came with a warning label, what would it say?
Nothing, because I'd be certain to have it removed. Though I wouldn't object to being labeled "Warning: Great Pleasure in Store."
James Gibbs fills in the blanks...
I love pizza* with you.
I'm always ready for *chuckles suggestively*.
When I'm alone, I try not to think about the past.
If I had a halo it would be twisted into a pretzel and sold.
If I could erase the Cloister from ever existing I'd do it in a heartbeat  .
I can never go back to South Maidras because of what happened with that trio of dancing girls and their manager. But ah, lass, it was fun.
About the Author
Heidi Cullinan lives in Iowa. She’s always loved a good love story, provided it has a happy ending. She enjoys writing across many genres but loves above all to write happy, romantic endings for LGBT characters because there just aren’t enough of those stories out there. When she isn’t writing, Heidi enjoys knitting, reading, movies, TV shows on DVD, and all kinds of music. She has a husband, a daughter, and too many cats.
Her most recent release is The Pirate's Game, a fantasy about love triangles (and quadrilaterals) while giving chase and braving fierce battles on the high seas. The Pirate's Game is the third book in the first Etsey trilogy.
Find Heidi on the Web: Twitter, Facebook, WordPress, and her website. Also visit Heidi as one of the co-owners of the naughty blog Coffee and Porn in the Morning.
Posted by Kayelle Allen at 9:23 AM 3 comments

The top bloggers (by page load) for the month of April resulted in two ties, and two people had two posts each, all of which came in at the top. My own birthday post had the most hits. After patting myself on the back, and nearly breaking my own arm in the process, ;) I decided to include the top eight, because there was only one point between numbers seven and eight. Surely a banner month for everyone!

I was pleased to see that three of the Outlantacon interviews scored at the top. There were seven featured, and all scored well. The entire month was a win-win. Guests scored some free books, everyone got to read cool articles and interviews, and there were links to books, upcoming conventions, and videos.