Cover Love includes a cover, blurb, buy links, and social media contacts for the author. Today's featured book is Surrendering to the Beast by Tina Donahue.

Title Surrendering to the Beast
Genre Erotic Paranormal-Romantic Comedy
Author Tina Donahue
Book heat level (based on movie ratings): R
When she's good, she's very good. But when he's bad, she's better.
Taming the Beast, Book 2
As a good fairy, Heather is empathetic and chaste to a fault. No bad language, no dirty thoughts, flirting and no sex. But when a satyr named Daemon steps up to her reception desk at From Crud to Stud, she finds herself on the fast track to exquisite corruption.
Daemon is the total bad-boy package with a kiss straight from the dark side. Though he's here for a supernatural makeover, Heather can't imagine why any red-blooded woman would want him to change.
A disciple of the god of wine, Daemon has had his share of good times. But sex has never been this good. Heather brings out a new side of him, a side that makes him want to protect as well as pillage.
But Daemon needs a little creative backup to help set his fairy's naughtiness free. And that means bringing in Mistress Jin. Under the genie's tutelage and Daemon's shameless lust, Heather is about to learn what it means to let loose.
Warning: Not your typical bedtime story. May lead to indecent behavior, a taste for voyeurism, discipline, bondage, m/f, m/f/f and f/f action, which will result in screaming orgasms. Proceed with caution.

Anna Durand is an award-winning writer, a freelance librarian, and an audiobook addict. She specializes in steamy romances featuring spunky heroines and hunky heroes. As a member of Romance Writers of America, she volunteers for its chapters to give back to the romance community. In her previous life as a librarian, she haunted the stacks of public libraries but never met any hot vampires hunting for magical books.

The Heroine's Relaxed Side

This heroine is at a party. Considering her story, describe the party.
Mel Thompson has been dragged to a party at the cramped apartment of her best friend, Adam Caras. The place is filled to capacity with family and friends, including Adam's rowdy firefighter buddies.
How does the heroine feel about being at this particular party, and what body language is she displaying that gives it away?
Mel lingers behind the bar, arms wrapped around herself, gaze scanning the room for Adam. She used to love parties, but now they make her nervous. Though she's still confident at work, in her personal life she's lost her self-assurance.
Is she more likely to mingle or remain aloof?
She'll stick close to Adam, even avoiding his brothers and father, whom she's known her whole life.
If she drinks, what is her drink of choice at this party?
Beer. She grew up next door to the Caras boys, and though beer isn't her first choice, at a Caras party she's not averse to tossing back a lager.
How much drink is her usual?
She drinks in moderation, never getting drunk. Well, maybe not never…
The heroine figures out where the hiding places are and then goes there. Is it to hide, to avoid someone, or to go drag a friend back to the party?
Mel longs to escape the party -- especially when Adam's buddies start referring to him as the Arsonist, a renowned ladykiller.
Is she likely to latch onto a friend and stay with him/her and ignore others, or is she the friend that others latch onto?
She wants nothing more than to cling to Adam, or hide behind him, but he keeps dragging her into conversations with everybody else.
If someone picked a fight at this party, how is the heroine going to handle it?
Anyone who attacks Adam, or harasses a woman, will meet Mel the Terminator.
Is the heroine the one most likely to get tossed out of the party, or the one who does the tossing?
Don't mess with Mel. She may be nervous at a party, but she'll boot out the troublemakers.
Will she know when to leave, or stay late and make a nuisance of herself?
She'll try to sneak out early, but Adam will convince her to stay until everyone else is gone. He's got an ulterior motive, but she's oblivious to it.

The Heroine's Stressed Out Side

How does the heroine handle it if the cops or some other authority figure pulls her aside when she was blameless in a situation?
She'll give them a tongue lashing, for sure.

How does the heroine react to hearing a scream?
Mel flinches, but then rushes to see if someone's in trouble.
If she sees someone being assaulted, what is the FIRST thing that crosses her mind?
A man attacking another man: Too dangerous, run away.
A man attacking a woman: Won't let another woman become a victim.
If she sees someone being assaulted, what is the FIRST thing she does?
A man attacking another man: Call the cops.
A man attacking a woman: Jump in with her stun gun to stop the assault.
This heroine attempts to rescue someone and realizes that she is in over her head. The odds are against her and there is no way out. She is going to get her butt handed to her. What does she do?
Call Adam on her cell phone.
The heroine runs into the one person from her past she wanted to avoid. She can't get out of the situation and must interact with him/her in some way. What does she do?
When Mel runs into her cheating ex, Devon McCallister, she puts up a tough front to hide her fear while searching for a way out, one that won't alert Devon to how scared she is.
Someone younger than the heroine is in charge of the situation, and they are handling it badly, perhaps bungling things. How does the heroine deal with it?
Mel started her own business from the ground up, so she excels at finding a diplomatic way to step in when someone else is screwing up.
The heroine is in physical pain but must bear up under it and keep going. What does she tell herself in order to get through the situation?
She remembers how resilient her late father was and takes strength from those memories.
What mentor's words come to mind in a bad situation?
She remembers her dad's corny advice, like "Crying doesn't make you weak, Melly. Even a tough cookie can have a soft center."
What lesson from her past gets her through a stressful situation?
Getting through her father's death proved to her she can handle even the worst moments. 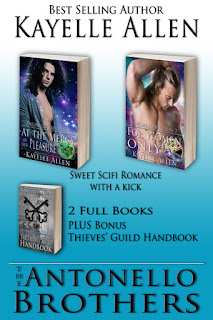 Today's featured book is The Antonello Brothers, a boxed set by Kayelle Allen.

In At the Mercy of Her Pleasure, professional thief Senth Antonello must retrieve a device stolen by the Imperial Armada, but his brother is kidnapped to force Senth to surrender it. His new partner, NarrAy Jorlan, is a genetically enhanced woman who could enhance the mission, or crumble it into dust with a single siren kiss. He's a thief. She's a soldier. Do opposites attract? Oh, mercy! In For Women Only, Ambassador Mehfawni Ruh discovers the terrible secret Khyff hides. It could destroy her people and prevent her from leading them. She should shun the human, but how can she leave Khyff to suffer in the darkness that binds his heart? His secret truth is her people's darkest lie.


Meet Senth and his big brother Khyff in At the Mercy of Her Pleasure, and For Women Only. Round out the fun with secrets of the shadowy Thieves' Guild (of which Senth is a premier member) in the Thieves' Guild Handbook. This scifi romance boxed set is sweet romance with a kick. Join two tough brothers as they work for freedom, and find their true loves.