Title Loving Lies
Genre Erotic Historical
Author Tina Donahue
Book heat level (based on movie ratings): R
Deception knows no limits. Passion knows no bounds.
When she is kidnapped, Senorita Isabella knows the men have been sent by her uncle in a murderous attempt to control her family's fortune. But when she is rescued by a dashing and mysterious warrior, Isabella can't imagine why a stranger would risk his life for her—until she discovers her rescuer believes she's someone else.
Fernando de Zayas loves nothing more than the cry of battle. Defying death is his way of life. But when he discovers his betrothed has been kidnapped, he rushes to her aid—never suspecting that spirited beauty would soothe his warrior heart.
With her uncle's minions close on their heels, Isabella finds herself drawing closer to Fernando. But as the desire between them builds, her secret could keep them apart forever. 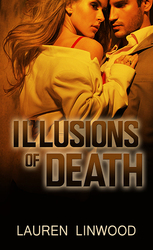 Lauren Linwood’s historical romances use history as a backdrop to place her characters in extraordinary circumstances, where their intense desire for one another grows into the treasured gift of love. Her romantic suspense novels feature strong heroes and heroines who unite to defeat a clever antagonist and discover a deep, abiding love during their journey.
A native Texan, Lauren is an avid reader, moviegoer, and sports fan who manages stress by alternating yoga with long walks. She plans to start a support group for Fixer Upper addicts—as soon as she finishes her next piece of dark chocolate.

Why did you write this book?
Although I enjoy reading romantic suspense, I usually write historical romance (medieval and the American Old West eras). Every now and then, another type of story calls out to me. That was the case with Illusions of Death, my second romantic suspense novel. I envisioned a serial killer who would be impossible to catch because he had no set murder pattern. He kills victims from every gender, race, and socio-economic background—and equal opportunity killer!
What is your favorite genre to read?
I enjoy thrillers that have some type of historical connection. Steve Berry and Brad Meltzer do a fabulous job of weaving history into action-packed stories that keep a reader guessing till the very end.
Who is your favorite character from fiction (not including your own)?
Elizabeth Bennet from Pride and Prejudice gets my vote. Lizzy is intelligent, compassionate, loyal, witty, charming, and feisty—everything I love in a heroine.
What are you working on at the moment, and will see from you in coming months?
I’m excited to share that I’m launching my first series after nine standalone novels. The Knights of Valor series will debut with Word of Honor in April, followed by Marked by Honor in July and Code of Honor in October. Three more books from this medieval historical romance series will be released in 2017.
Please tell us about your latest book.
Best-selling author Karlyn Campbell is ready for a new start after her recent divorce from a temperamental artist. When she receives word that her father had a stroke, she heads for Walton Springs with mixed feelings. Broderick Campbell wrote Pulitzer Prize-winning literary novels and denounced his daughter’s work as pedestrian and commercial, causing a rift that finally heals on his deathbed. Karlyn chooses to stay in the small Georgia town to write her popular Matt Collins series and decides to try her hand at true crime when Atlanta’s Rainbow Killer, Roy G. Biv, captures her interest.
Detective Logan Warner’s marriage didn’t survive after he lost his twins to a crazed killer who was never caught. He returns to his hometown’s police force and runs for police chief, happy he’s escaped big city crime and corruption. Emotionally dead, his interest in life is renewed when he falls in love with Karlyn and begins to build a new life with her.
But the Rainbow Killer moves beyond Atlanta, leaving a trail of dead bodies painted in bright hues in several towns north of the city. Leaving no trace evidence or DNA and choosing random victims with no apparent rhyme or reason, Roy proves unstoppable. Then he arrives in Walton Springs, threatening the peaceful town with his murder spree. With a serial killer in their back yard, Logan and Karlyn unite with the FBI to find the killer—before he finds them.

Each month, the RLF Gems post ranks in the top ten, but is not counted, in order to focus on guests. The winners are judged by page views. Congratulations to each one! There is a tie for third place.
1 Jackie Weger
2 MQ Barber
3 Alanna Lucas
4 Kate Moore
5 Anna Durand

Romance Lives Forever features authors and new books. It has a blogger's FAQ page with a downloadable guide and six optional interviews. Readers can follow via Google+, Networked Blogs, Linky Followers, email, an RSS feed, and there's a blog button readers and authors can grab. Authors can share previous books. The blog uses author or publisher names as tags on posts, and author Twitter handles in the titles. The site is broadcast over Triberr with a potential reach of over 3.5M readers via its Twitter-linked network. Twitter mentions are also gathered in several Paper.li ezines, giving the author additional opportunities for promotion. The Romance Lives Forever Paper.li ezine features only guest authors, and the day's guest is on its front page every day.

Limited spots to share book covers are available. Cost is $5 per month, with a 20% discount for one quarter and up to one year. Covers can be changed monthly.

Author Nicole Morgan assists me with scheduling for Romance Lives Forever. She is the blog admin. Look for emails from her. Nicole and I want to ensure everyone who requests a spot on the blog gets a personal response. Please use this email if you have questions or need help: rlfblog-owner@yahoogroups.com We both receive email sent here. You don't have to join a group or do anything special. This group simply provides a joint email for us and streamlines things for you. The email address is included in all downloadable interviews on the FAQ page.

Other participants this month in alphabetical order by first name are: