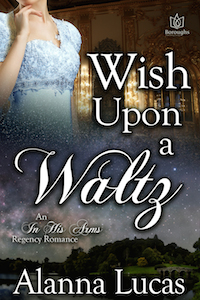 Today's featured book is Wish Upon a Waltz by Alanna Lucas.
About the Book
Title Wish Upon a Waltz
Genre Historical Romance- Regency
Author Alanna Lucas
Book heat level (based on movie ratings): PG13
Quiet lady’s companion Anastasia Quintin understands her place in society and wishes for no more than the life she has undertaken…until a fateful house party for the Earl of Huntingdon gives her one night, one dance, one chance at all of her discarded hopes and dreams.
One Night, One Dance, One Chance
At twenty-five, Anastasia Quintin has resigned herself to live in quiet seclusion as companion to Miss Albryght, but one lost wager by her headstrong bookworm of a mistress soon requires Anastasia’s return to the society from which she hides. Her first event in eight years is to be a house party in honor of the recently entitled Earl of Huntingdon, hosted by his haughty old grandmother.
Having come to his title by tragedy, the handsome Huntingdon is new to the ton, but he is not new to Anastasia. Dante St. Clair is the very man who long ago stole her heart and thereafter dashed all her hopes and dreams. He is the man she must never let discover her identity, but whom she can no more avoid than a moth can a flame. One waltz will destroy her, and for it, Anastasia will risk everything...and win.
Buy This Book

Publisher http://boroughspublishinggroup.com/books/wish-upon-waltz
Amazon http://www.amazon.com/Wish-Upon-Waltz-Alanna-Lucas-ebook/dp/B015PHRV5Y/
Barnes and Noble http://www.barnesandnoble.com/w/wish-upon-a-waltz-alanna-lucas/1122692409?ean=2940152369243
ARe https://www.allromanceebooks.com/product-wishuponawaltz-1897687-148.html
Kobo https://store.kobobooks.com/en-us/ebook/wish-upon-a-waltz
About the Author
Alanna Lucas grew up in Southern California, but always dreamed of distant lands and bygone eras. From an early age she took interest in art, history, and travel, and enjoys incorporating those diversions into her writing. However, she believes that true love is the greatest source of inspiration and is always an adventure.
Alanna makes her home in California where she spends her time writing historical romances, dreaming of her next travel destination, spending time with family, and staying up too late indulging in her favorite pastime, reading.
Author Social Media
Website http://www.alannalucas.com/
Twitter https://twitter.com/alannalucas27
Facebook https://www.facebook.com/alannalucas27
Amazon Author Page http://www.amazon.com/Alanna-Lucas/e/B00HPC0MYU/
Posted by Nicole Morgan at 7:00 AM 10 comments 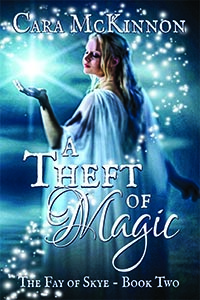 Meet Sorcha Fay from A Theft of Magic.

Cara McKinnon wrote her first fantasy romance at the age of six, about a unicorn couple that falls in love and has adventures (there is also pie). Now she writes about humans falling in love and having adventures, but she can't quite stop including magic. She loves history and historical romance, so she decided to set her books in an alternate Victorian era where magic is not only real, but a part of everyday life. Cara attended the best genre writing school in the world, Seton Hill University, where she received an MFA in Writing Popular Fiction and found her writing tribe. She lives on the East Coast of the US with her husband, two kids, and an oversized lapdog named Jake.

Title A Theft of Magic
Genre Fantasy Romance
Book heat level (based on movie ratings): R
A woman sworn to truth. A man who deals in lies. A passion lighting the way to love...or loss.
At the behest of the Duchess of Fay, Ronan McCarrick, thief, smuggler, and Irish revolutionary, travels to the Isle of Skye, the domain of Sorcha Fay. She is known as the Seeress of Skye, an elusive figure who rarely leaves the island. Ronan’s arrival triggers one of her defensive spells, incinerating his clothing and everything he’s carrying. Including the letter that would have told Sorcha why he has come to Skye.
Despite an instant attraction to the naked and furious Irishman, Sorcha believes that Ronan is an interloper who has been attacking her wards for months. Even when part of his story is confirmed, she still mistrusts him. But when she discovers that two powerful objects are missing from the Fay vaults–someplace he couldn’t have been–she’ll need his help to steal them back.
If he doesn’t steal her heart first.

Welcome to Romance Lives Forever! We're happy to have you here today.

Name: Sorcha Fay
Age: 26
Gender: Female
Birthplace: Fay House, Skye, Scotland
Profession: Caretaker of Fay House
Ethnicity/Species (if not human): Human
Describe your body and build, skin tone, height and weight. Include any unique features such as dimples, freckles, or scars.
I’m very short and very curvy. I curve out far more than I curve in! My hair is light blonde, with a streak of silver/pearl color that everyone in my family gets when they’ve used magic long enough. I’m very pale, as you might expect from a blonde, with pale blue eyes. I’ve been told they look like a summer sky.
Who is the significant other in your life?
The only significant thing in my life at the moment is Fay House. But I recently met a man named Ronan, and if I can trust him…
Please tell us a little about yourself.
I’ve spent nearly all of my life in the Highlands and the Isles of Scotland. I am in charge of Fay House, the ancestral home of my clan, but the rest of the family only comes here once a year, so most of the time I’m alone with my small staff and the tenants. Like most of the members of my clan, I can do magic, and I am known for having frequent visions of the future and very strong magical intuition.
On what special skills do you rely?
My magical intuition provides me with extra information about people and situations. I can usually tell when things are about to go wrong, although that doesn’t mean I can do something about it!
Are any of your skills a source of pride or embarrassment, and if so, which ones and why?
I have frequent visions of the future, and coupled with my intuition, I’ve been given the nickname the “Seeress of Skye.” But I dislike that name, because I can’t control my visions the way true Seers can. The visions come at their own whims, and are about wildly different things. Sometimes they give warnings, or show me scenes from my own future, but most often they are of distance times, places, and people.
What is your family like?
My family is big, loud, and rambunctious. It is always a bit of a shock when they descend on me at midsummer and stay for two weeks, or when I travel to a gathering for a marriage, birth, or funeral. But though I do miss them when they aren’t around, I prefer my solitude, quiet, and peace.
Are you involved in your community?
Very much! Our family owns all of the land in the vicinity, including the town, so everyone nearby is a tenant of Clan Fay, and a nominal member of the clan, though not everyone has sworn oaths to Le Fay, our chieftess. As the representative of the clan on Skye, I settle disputes, collect rents, and oversee any needed improvements or repairs. I am also the strongest mage in the vicinity, so if anyone needs a spell cast, they come to me.
If someone from your past showed up, who would you most want it to be, and why?
I would like to know who my father is. He was out of my mother’s life before she knew she was pregnant, and she never told me his name, or where I could find him. I don’t even know if he’s still alive.
If you could make any one thing happen, what would it be?
I would have the solicitors who manage Fay House’s finances actually open the pursestrings and allow me to invest in improvements to the house and grounds. At the moment, I am only allowed enough money to cover repairs and upkeep, but the house is in desperate need of modernization and renovation.
When (if) you lie or are upset, what gives you away?
It is very difficult for me to lie. When I try it, I am usually stiff and awkward about it, and stumble over my words. I also flush easily with my pale skin, and lying makes me feel embarrassed, so even if I manage to get the lie out, my cheeks and throat give me away. 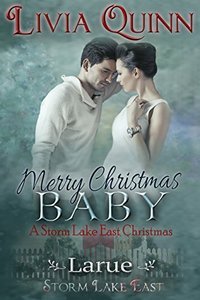 Cover Love includes a cover, blurb, buy links, and social media contacts for the author. Today's featured book is Merry Christmas Baby by Livia Quinn.
About the Book
Title  Merry Christmas, Baby
Genre  Military Romance
Author Livia Quinn
Book heat level (based on movie ratings): PG13
Through November all sales from Merry Christmas, Baby will go to veterans' charities. And it's on sale now for 99cents. It's a win-win.
It’s a Christmas weekend full of love and Larue social media is a twitter at the return of their hometown movie star, Ducane Beauregard Larue, and a visit by Raptors quarterback, Gino Manelli, at the only place to celebrate Christmas Eve—the Romanos’. Catch up with the characters from Larue and Thunder Point, and as a bonus get a peek at upcoming characters.
Beau hates Christmas. It reminds him of what he can’t have. He’s been avoiding homecomings, and the biggest reason is unavoidable this Christmas – Madison Hart, who has loved Beau for most of her adult life. Whenever rumors surface about him returning home, Madison hyperventilates at the prospect of seeing him again.
Samantha Larue’s baby is overdue and everyone is hovering including Jed, who ended their relationship last summer because kids weren’t “in his future”. But this one is in his present.
Bad guys don’t scare Delilah Burke but Luc’s mother and five sisters have her stalling on setting a date to marry the man she loves.
Nothing could make Buffy Romano happier than delivering a few surprises and helping the people she loves find love. Then, a Christmas Eve miracle confirms what she already knows – that with a little nudge, all her loved ones’ happily-ever-afters will happen in the not so distant future.
Buy This Book
Amazon  http://amzn.to/2fssHDI
Kobo  http://bit.ly/21PvTO3
Nook http://bit.ly/1P4qA0V
iBooks http://apple.co/2fr3WcP
ARe  http://bit.ly/1N3sBJB
Goodreads https://www.goodreads.com/book/show/28146640
Page Foundary http://bit.ly/2fZpZ8h
24 Symbols  http://bit.ly/2g0DuqE
About the Author
D.C. native, Livia Quinn, now lives and writes by the bayou in Louisiana. She's written eleven books in her Storm Lake series, both paranormal and contemporary romance. While working as a plant manager, computer trainer, mail lady, professional singer, and small business owner she's stocked her brain full of great characters and fodder for her stories, and loves to share them with her readers. Nothing gives her a thrill like being able to make a difference for our veterans to whom we owe everything.
Author Social Media
Blog: https://liviaquinnwrites.com/livias-ramblings
Her brand new Website: http://liviaquinn.com
Facebook http://www.facebook.com/liviaquinnwrites
Twitter    http://twitter.com/liviaquinn
Pinterest http://pinterest.com/liviaquinn
Goodreads http://bit.ly/22VXuev
Livia’s Author Central page http://amzn.to/1T5qmhN
Google+ https://plus.google.com/u/0/+LiviaQuinn
Linkedin http://bit.ly/2dbYAP2
Instagram http://instagram.com/liviaquinnauthor