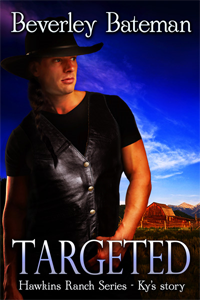 Play Is It True with today's guest Beverley Bateman, author of Targeted, a Romantic Suspense. This is a game in which authors answer yes and no questions. They can elaborate on answers as much as they choose.

First, tell us about your book.
Book heat level (based on movie ratings): PG
After and eleven-year absence Janna Kincaid inherits a ranch and is forced to return to a town she only remembers with unhappiness, a man to whom she was briefly married and never wants to see again, and someone is trying to kill her.
Kye Hawkins has loved Janna since he first met her. They were married but a few weeks later she ran away, without an explanation. He still hasn't figured out why. Now she's coming back. Does she still love him? Can he rekindle the romance and also prevent her from being killed?
Janna doesn't want Kye's help in anyway, yet he always seems to be there when she's in trouble. Can they work together to find a killer, save the Native burial ground and home of the spirits, and find romance again?
Now, tell us Yes or No for each answer below. Feel free to explain any (or none) of your answers.

this is your first book? No
this book is part of a series? Yes. It's the third in the Hawkins Ranch series.
you lost sleep while writing this book? No
you did research for this book? Yes – lots of research on ranch life and the Blackfoot tribe
some characters in this book are not human? (pets for example) Yes
this book has more than one genre? Yes - western, romance and suspense
you speak more than one language? No
you grew up where you live now? No
you love to read? Yes
you are never late?
you love pizza? Yes
you love sushi? Yes
you have a pet? Yes - two

Beverley Bateman started writing when the locked room murders were popular and loved to write a few of them. Recently she left the beautiful Okanagan Valley in BC, Canada with her husband and two Shiba Inu dogs for Medicine Hat, Alberta. It's smaller and more friendly. She lives there in the summer, and winters in Tucson, AZ away from the snow and cold. She writes in both places. Hunted, Missing and the newest – Targeted are part of her Montana series. She also has her Holly Devine series; A Cruise to Remember, and a Murder to Forget. Don't Go is her darker romantic suspense. And By Design, a medical thriller will be out soon.
Website http://www.beverleybateman.com
Blog http://beverleybateman.blogspot.ca/
Twitter http://twitter/kelownawriter
Facebook https://www.facebook.com/beverley.bateman.18
Facebook Authorpage - http://www.facebook.com/AuthorBeverleyBateman?ref=hl
Pinterest http://pinterest.com/okwriter
Goodreads https://www.goodreads.com/author/show/7052567.Beverley_Bateman

Posted by Kayelle Allen at 7:05 AM 3 comments 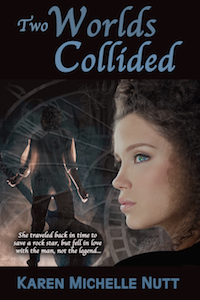 Evie Reid agrees to travel back in time to 1997 to change bad boy Bellamy Lovel's path of destruction. Evie knows despite all Bellamy's smiles and enthusiasm on the stage, he's destined to end it all on one lonely night in a hotel room unless she can change his path.

Karen Michelle Nutt resides in California with her husband, three fascinating children, and houseful of demanding pets. Jack, her Chorkie, is her writing buddy and sits long hours with her at the computer.
When she’s not time traveling, fighting outlaws, or otherworldly creatures, she creates pre-made book covers to order at Gillian’s Book Covers, “Judge Your Book By Its Cover”. You can also check out her published cover art designs at Victory Tales Press and Rebecca J. Vickery Publishing.
Whether your reading fancy is paranormal, historical or time travel, all her stories capture the rich array of emotions that accompany the most fabulous human phenomena—falling in love.
Website http://www.kmnbooks.com
Blog  http://kmnbooks.blogspot.com
Twitter  https://twitter.com/KMNbooks
Facebook https://www.facebook.com/authorkarenmichellenutt
Pinterest http://pinterest.com/karenmnutt/
Goodreads https://www.goodreads.com/author/show/190487.Karen_Michelle_Nutt
Amazon Author Page http://www.amazon.com/Karen-Michelle-Nutt/e/B002BLLBPE
Gillian’s Book Covers, “Judge Your Book By Its Cover” http://judgeyourbookbyitscover.blogspot.com/
Anthology Coordinator at VTP http://victorytalespress.com 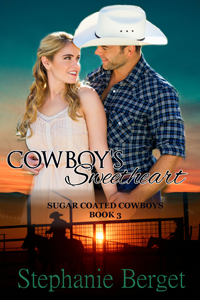 Why did you write this book?
This is the third in my Sugar Coated Cowboys series. Byron appeared briefly in the first two. I became intrigued by this big, strong man who was a loner, frightened of getting too close to people, but who longed to have someone to love.

What is your favorite genre to read?
Small town romance with a touch of humor.

Who is your favorite character from fiction (not including your own)?
That would have to be Davie Dempsey from Jennifer Crusie's Faking It. I also loved the heroine in that book, Matilda Goodnight.

What are you working on at the moment?
I'm working on a western romance set in Greenleaf, Idaho about a Barrel Racer and a Saddle Bronc Rider. It's a second chance romance with the working title, Mavis and Butthead. LOL

What books will we see from you in coming months?
Well, Mavis' book by the first of June and later this fall, the sequel to Radio Rose.

Please tell us about your latest book.
Genre Western Romance
Book heat level (based on movie ratings): R
Byron Garrett has found peace as the foreman on the Circle W ranch. He's far from his controlling father and the man's demands that Byron make him proud as a pro football player. Born a city boy, he's found his passion with the land, his horses and the cowboy way of life. He's found all he needs and it doesn't include a woman or the complications that come with love. At least, not until a bubbly artist shows up and does her best to tear down the corral he's built around his heart.
Vivi Beckett is searching for a place that feels like home. After traveling the country, she's finally found it in the beautiful wilds of Oregon. With the inheritance left her when she was orphaned, she'll buy a place to live and create her art. But after meeting Byron, Vivi suspects her dream alone won't be enough to bring her happiness … not unless he's at her side.
All of Vivi's dreams are at risk when she discovers her inheritance is in jeopardy. She needs help, but Byron's past has left him unwilling to give anyone power over his life. The ghosts in hers have left her desperate to be needed.
Will Byron be willing to join her on a different and perhaps even better path?
Publisher Malheur Butte Publishing
Amazon https://amzn.to/2lqXku3

Romance beneath a rodeo moon. That's what Stephanie Berget had in mind when she began writing, to add a realistic view of rodeo and ranching to her Western Romance.
She was born loving horses, developing a lifelong love of rodeo when she married her Bronc Rider. They traveled to rodeos throughout the Northwest while she ran barrels and her cowboy rode bucking horses.
Stephanie and her husband have three adult children and several grandchildren. They live on a farm located along the Oregon/Idaho border, where they raise hay, horses and cattle, with the help of Cisco, the wonder horse, Dizzy Dottie, the Border Collie, and two Munchkin cats, Magic and Martin.
Website http://www.stephanieberget.com
Twitter: http://twitter.com/stephanieberget
Facebook https://www.facebook.com/profile.php?id=100012727391907
Pinterest https://www.pinterest.com/stephanieberget/
Goodreads https://www.goodreads.com/author/show/7072973.Stephanie_Berget
Amazon Author Page https://www.amazon.com/Stephanie-Berget/e/B00CJYM8KK/

Posted by Kayelle Allen at 7:05 AM 8 comments